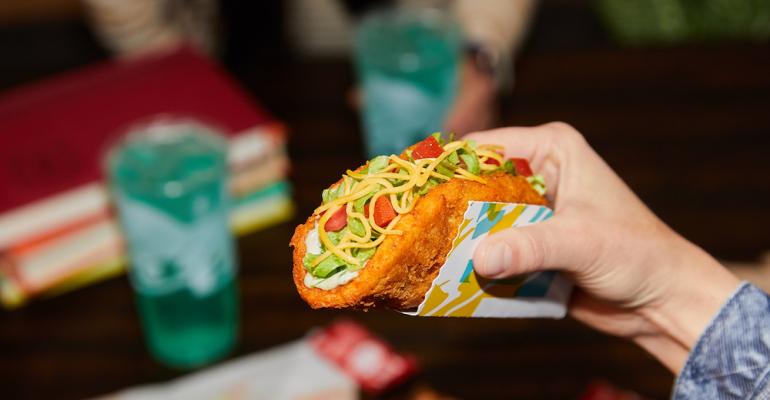 Taco Bell has removed the Quesalupa from the menu, bringing back the Naked Chicken Chalupa to replace it.
News>Quick Service

The fan-favorite, limited-time menu item has officially left the chain — for now

After reintroducing the fan-favorite menu item in March, Taco Bell has removed the Quesalupa from its menu after teasing a late-May removal of the limited-time offer. The item has been slowly phased out of menus across the country this week with no official announcement.

On March 11, the quick-service brand brought back the Quesalupa for a limited time, but didn’t specify how long it would be on the menu. The Yum Brands subsidiary brought back the item —  a melted blend of pepper Jack and mozzarella cheese coating the inside of a crispy Chalupa shell, with cheddar stuffed inside along with seasoned beef, lettuce, diced tomatoes and reduced-fat sour cream — the same day Chipotle debuted its quesadilla. The new version of the Quesalupa had 50% more cheese than the original.

The Quesalupa was initially launched in Toledo, Ohio, in 2015, with a nationwide rollout in 2016 to much fanfare. Despite its menu success, the item was never meant to be permanent and another LTO has replaced it on the menu: the Naked Chicken Chalupa. The item was originally tested for two years, debuted nationwide as an LTO in January 2017, and was reintroduced in May 2018 before disappearing from the menu again.

The Naked Chicken Chalupa is marinated, breaded chicken breast that replaces a tortilla, filled with lettuce, cheese, diced tomatoes and avocado ranch sauce. It became available again on May 20. It has so far been met with positive online reactions from customers.

“Innovation is core to Taco Bell’s DNA, and LTOs allow them to continuously make room for more innovations,” a PR representative for the company said.

While there are currently no plans to bring the famed Quesalupa back, a spokesperson for the chain said, “never say never.”