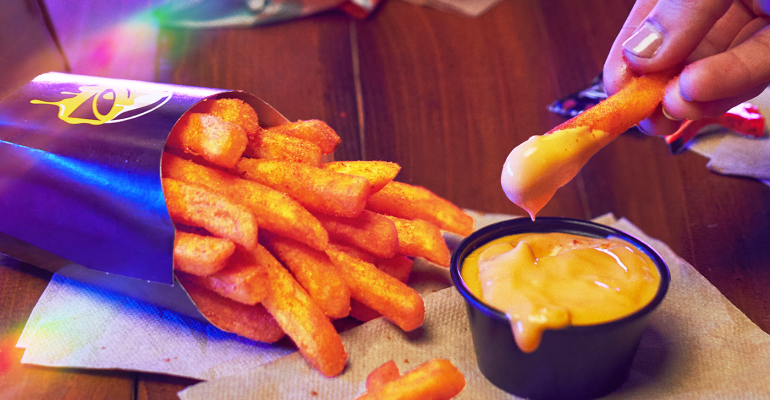 It’s 2018 and Taco Bell launched Nacho Fries for the first time — what will become its best-selling limited-time offer ever — and the chain will sell 53 million orders in first five weeks.

Actually, no. Though that was true in 2018, when Taco Bell really first launched the spice-dusted Nacho Fries. We’re just stuck in a time loop, in the style of the movies “Groundhog Day” or “Palm Springs.”

It’s true that Nacho Fries are back, starting March 10. As is tradition for the Irvine, Calif.-based chain, Nacho Fries are being promoted with a faux movie trailer. This year, Taco Bell crowd-sourced ideas for the trailer on Twitter via the hashtag #FriesChallenge, which prompted the time loop story line.

Dubbed “Fry Again” and produced in partnership with Deutsch LA, this year’s trailer teases the story of Vanessa, a Taco Bell fan who is stuck in a time loop. Happily, she gets to enjoy Nacho Fries every day — though a “Terminator”-like villain appears to be after her.

Fans also helped write the script, selecting details like the type of car Vanessa would be driving to her outfit and the name of her dog (“Baja).

“We’ve explored tons of genres for Nacho Fries over the years, but this may be my favorite yet because it gave our most loyal fans a front row seat to co-create one of our biggest fan-led campaigns every,” said Tracee Larocca, head of brand creative for Taco Bell, in a statement.

Rewards members have the chance to snag the “first dip”— because the fries are served with cheesy sauce — via the app March 8-9, from 11 a.m. to 1 p.m. And Rewards members can also score free a la carte fries (with a minimum $1 purchase) from March 24-26; and Grubhub will offer the Nacho Fries free (with minimum $15 purchase) March 27-April 13.

The fries are priced at a recommended $1.49, or in a Nacho Fries Box for $5.49, which includes the fries, a beefy five-layer burrito, a crunchy taco and a medium drink.