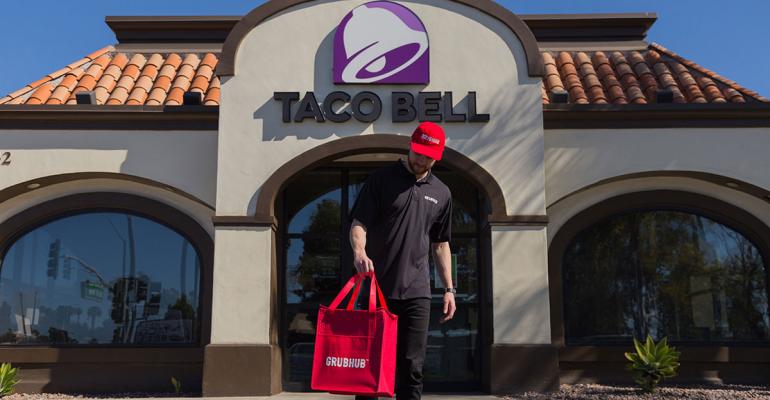 Delivery is available at 65 percent of the chain’s 7,000 domestic restaurants

Starting today, Taco Bell fans can chomp on a chalupa or a party pack of tacos without interrupting their latest Netflix binge, as doorstep delivery has finally arrived.

The Irvine, Calif.-based quick-service chain said delivery through Grubhub is now available at 65 percent, or about 4,500 of Taco Bell’s 7,000 domestic restaurants. The national launch of delivery comes a year after the chain’s parent company, Yum Brands, invested $200 million in Grubhub. 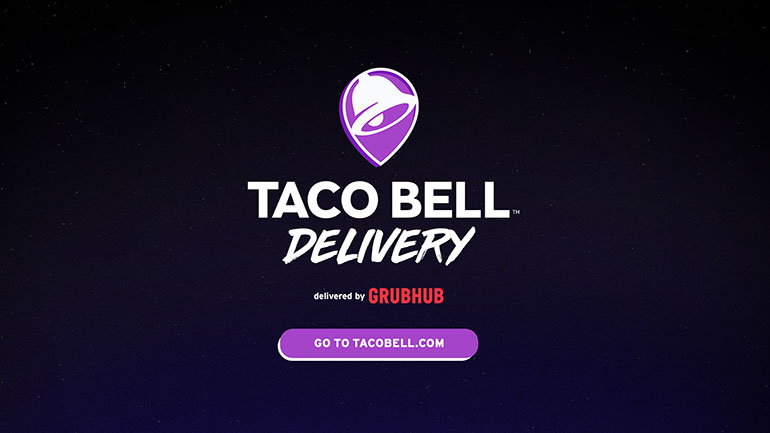 “We are thrilled because our expanded Grubhub delivery access for our Taco Bell customers will help satisfy their cravings with the delicious Taco Bell they already know and love, whenever, wherever and however they want it," said Julie Felss Masino, Taco Bell’s president, North America, said in a statement.

And, in true Taco Bell fashion, delivery won’t just be a box that appears on your doorstep, said Masino, president since January 2018.

Delivery will come with a friendly note, and as many sauce packets as customers desire — free of charge. Limited-time menu items will also be on the menu, something restaurant chains don’t always offer.

“We’re excited to bring the magic back to delivery,” Masino said in a phone interview with Nation’s Restaurant News. “You’ll get a thank you note with your delivery. It’s something only Taco Bell will do.” 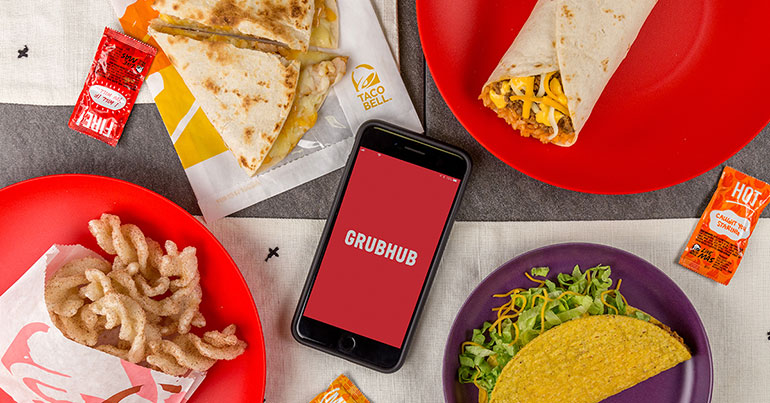 To celebrate the kick off, delivery is free with orders of $12 or more.

In early testing of delivery which began in September 2018, Taco Bell said delivery orders are, on average, $15. That’s nearly twice the $8 average check of in-store orders.

“We are incredibly excited about what results we see,” Masino said.

Taco Bell menu prices on the Grubhub app are the same as store prices. There are no menu price increases for delivery, which some brands have done to compensate for the third-party delivery fees which can range from 20 percent to 30 percent.

Masino declined to provide the percentage cut Grubhub is making from Taco Bell deliveries. However, she said the Yum investment in Grubhub is working to benefit franchisees.

“All of this wouldn’t be possible without the scale of Yum,” she said. “We have a world-class deal and one that our franchisees our excited to execute.”

But scale has also acted as the brand’s Achilles heel.

Consumers have been demanding Taco Bell delivery for years, Masino said. But with 7,000 restaurants and a reputation for speedy service, she said Taco Bell didn’t want to launch delivery until the right technology was in place to ensure fast and frictionless service.

“There’s no room for error,” she said. “That’s why this has taken so much time.”

One of the key operational problems for early delivery adopters is the re-keying of orders, she said. First-generation delivery requires restaurants to keep a Grubhub, Uber Eats or DoorDash tablets at the front counter. Orders are then manually re-entered into the POS system.

Grubhub and Taco Bell worked together for months on the integration to ensure a seamless experience for both the consumer and restaurant operators.

“Taco Bell is one of the first QSRs we've worked with on POS integration, and certainly the largest to date,” Grubhub told NRN.

Chipotle Mexican Grill made a similar tech move last year with its partnership with DoorDash. The Newport Beach, Calif.-based fast-casual chain now offers delivery through its own app, making it one of the few national limited-service chains to offer doorstep delivery without sending customers to a third-party app.

In Chipotle’s case, DoorDash delivery orders are directly integrated with each restaurant’s POS system. As at Taco Bell, that eliminates employees re-entering orders. Chipotle also has second-make lines so that off-premise orders don’t clog up orders made by in-house guests.

With foot traffic stagnant throughout the restaurant industry, restaurants are turning to third-party delivery providers to boost sales. It’s one of the fastest-growing trends in foodservice, according to The NPD Group.

Restaurant digital orders have grown at an average annual rate of 23 percent since 2013 and are projected to triple in volume by the end of 2020, according to NPD’s “Delivering Digital Convenience” report.

Six out of 10 orders are made through mobile apps, the February 2019 report states.

At Taco Bell, customers can make delivery orders by going to the chain’s website, app or Grubhub. When on the Taco Bell app, guests can also order for pickup. Delivery orders will redirect customers to Grubhub.

The move brings delivery to close to two-thirds of Taco Bell’s 7,000 restaurants. Masino said it is unclear when the remaining locations will get delivery. Coverage depends on Grubhub, which has already stepped up its fleet of drivers to accommodate Taco Bell.