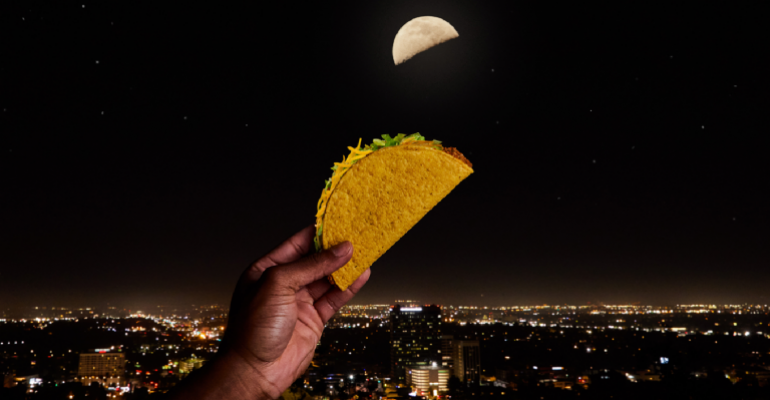 Taco Bell has launched their first global marketing campaign, the Yum Brands company announced Wednesday, and will be giving out free tacos on May 4 to celebrate a “new lunar phase” that they’re calling the “Taco Moon.”

Taco Bell is playfully suggesting that the moon will look like a taco at this time of the month (a waning crescent phase) and is celebrating by offering different free taco promotions in 20 markets around the world. For example, in Guatemala, customers will be able to claim a free crunchy taco with the purchase of a beverage, customers in India will be able to receive a complementary black bean or seasoned chicken crunch taco, and in the U.S., customers can get a free crunchy taco from 8:00 p.m. until midnight.

Related: Taco Bell is testing out a new vegetarian protein

“We're now in over 32 markets with over 600 restaurants [outside the U.S.] around the world,” Taco Bell global chief brand officer Nikki Lawson said. “And we thought it's time to get the whole world craving tacos, and what better way to do it than to enlist the world's biggest billboard [the “taco moon”] to help us here.”

The marketing campaign will incorporate multimedia initiatives on TV, social, and digital. And the campaign also encourages customers to sign up for Taco Bell’s app because digital customers will be able to claim the free taco all day (while the rest of customers have only that four-hour window).

Related: How Taco Bell is going to start recycling its hot sauce packets

“We were thinking, ‘how do we keep building the cult of Taco Bell?’” Lawson said. “At the heart of it is craveable food, but there's also digital: ease, convenience, personalization are all hugely important to the brand. And all of that becomes a huge part of who we are moving forward.”

This is not the first creative marketing campaign Taco Bell has launched in 2021: the Yum Brands company announced the $5 build-your-own cravings box in February, which also incorporated elements of digital interaction and customization.

Taco Bell said this will not be the last global campaign they run:

“We don’t want to get formulaic about it,” Lawson said. “But as the brand gets bigger there is more and more room for it.”