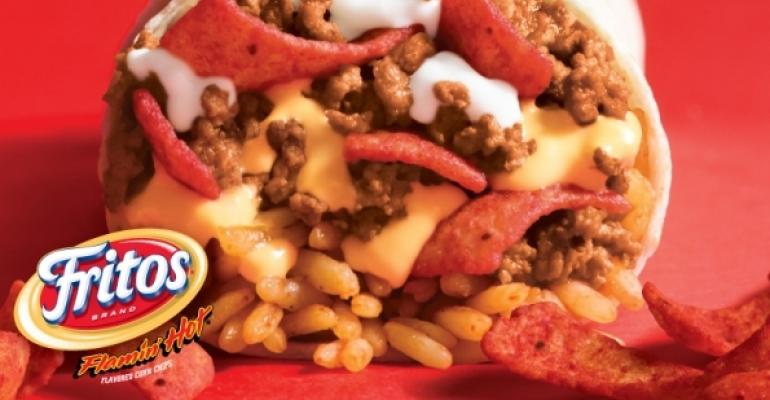 The Beefy Crunch Burrito will soon be back at Taco Bell. Again.

The Irvine, Calif.-based chain on April 21 is scheduled to bring back a former fan favorite as a limited-time offer: the Beefy Crunch Burrito for $1.

Stuffed with Flamin’ Hot Fritos and ground beef, the Beefy Crunch Burrito, or BCB, has been absent from Taco Bell’s menu for about five years, although it actually came back as an LTO once before, in 2013.

This time around, however, Taco Bell is promoting not the item but the rabid fan behind it: Richard Axton, whom the company described as the fearless leader of the Beefy Crunch Movement.

First launched in 2011, after the BCB left the menu the first time, the movement Axton started is supported by a community of about 39,000 “accomplices” with a Facebook page and, yes, its own flag.

@tacobell for the love of all that is holy please bring back the beefy crunch burrito. 20k+ people wanting it back #BeefyCrunchMovement

The group even had its own internal conspiracy theories.

After threatening to go to war last year, Axton called a ceasefire earlier this year, hinting at progress after being invited to go behind the scenes at Taco Bell headquarters.

The result of that diplomatic mission was the return of the BCB. At least, for a limited time.

“The fact that we have a brand that inspires its fans to create movements around their favorite products is something we value more than anything,” said Marisa Thalberg, Taco Bell Corp. chief marketing officer, in a statement. “Our fans always have a seat at our table … and, in this case, we wanted to honor their fandom for the Beefy Crunch and Cheesy Double Beef Burritos by giving them a piece of the menu. They deserve the credit for bringing them back — and our little thank you in return is bringing these favorites back for only a dollar.”

It’s not uncommon for restaurant chains to fan the flames of cult following for a menu item. Burger King in 2015 brought back Chicken Fries, an item that didn’t sell well when it was first introduced in 2012, but sparked a social media frenzy when reintroduced in 2014 and again in 2015.

McDonald’s, of course, has the McRib sandwich, the elusive LTO that moves from region to region. There’s even a McRib Locator web page where fans can report sightings.

With the return of the BCB, Taco Bell plans to also re-release the Cheesy Double Beef Burrito for $1 as another fan favorite and cult classic that left the menu three years ago. It features a double helping of beef and nacho cheese, wrapped in a flour tortilla.

The CDB has less of a social media following, with only 117 likes on its Facebook page.

The two items were reportedly tested in Louisville, Ky., last year as a  $2 “throwback burrito” promotion.