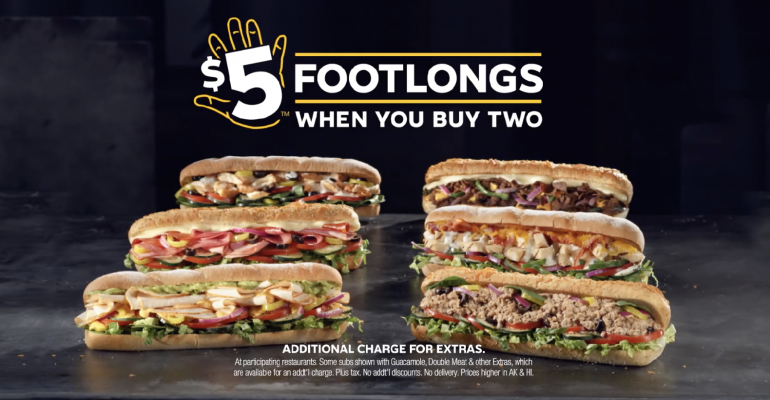 In 2016, the brand modified the promotion, albeit at a $6 price point, in the short month of February.
News>Quick Service

Subway brings back version of $5 Footlong for a limited time

Franchisees given option of participating in 2-for-$10 promotion

Subway IP LLC, parent to the giant sandwich chain, last week introduced a modernized version of its popular $5 Footlong promotion, offering two subs for $10, and franchisees were given the option of participating in the promotion.

The Milford, Conn.-based quick-service company did not say how many franchisees were offering the 2-for-$10 deal, even for its “limited time only” period.

A company spokesperson said Monday that “the majority of Subway restaurants are participating.” Subway’s U.S. system of more than 23,800 restaurants is entirely franchised.

The company had incentivized participation by getting its soft-drink supplier to contribute about $200 a week to operators who offered the promotion, according to the New York Post.

Franchisees earlier had pushed back on the promotion. About 75% of those polled by the North American Association of Subway Franchisees, which represents Subway store operators, had said they weren’t interested.

The NAASF executive director said Monday that the group would have no comment on the promotion.

The 2-for-$10 deal was accompanied by a new version of the catchy $5 Footlong jingle that featured “Attention” and “Marvin Gaye” musician Charlie Puth in television ads.

The return of the $5 Footlong resurrects one of Subway’s most effective promotions.

In 2008, at the height of the Great Recession, Subway borrowed the $5 Footlong idea from a franchisee and introduced it systemwide with an ear-worm jingle. The price point appealed to value-conscious consumers strapped by the economic downturn and was a huge success.

In 2016, the brand modified the promotion, albeit at a $6 price point, in the short month of February.

The 2-for-$10 deal, which started last Tuesday, is one of the first big promotions under the company’s new leadership of John Chidsey, the first non-family member to lead the company after Suzanne Greco stepped down in in 2018. Chidsey was named CEO in November and previously served as chairman and CEO of Burger King Holdings Inc.