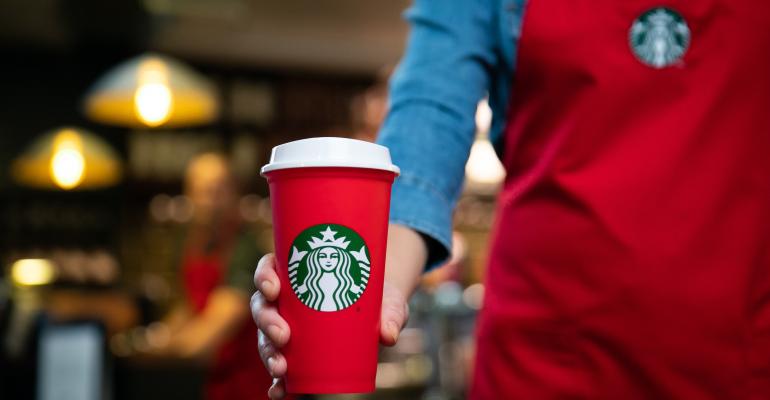 Thousands of workers in 100 stores around the country are picketing on Thursday — Red Cup Day, the day when Starbucks gives out free reusable red holiday cups with the purchase of a fall/holiday beverage — and giving out their own union red cups to passersby.
News>Quick Service

Starbucks’ union problems continue with striking workers, a NLRB request for a nationwide cease and desist order, and clashes about health and hygiene

Unionized Starbucks workers continue to show their displeasure with the company by going on strike to protest alleged unfair labor practices. Thousands of workers in 100 stores around the country are picketing on Thursday — Red Cup Day, the day when Starbucks gives out free reusable red holiday cups with the purchase of a fall/holiday beverage — and giving out their own union red cups to passersby.

Known as “Red Cup Rebellion Day,” the protest is being fueled by issues baristas have like understaffing (especially during the holiday rush), mistreatment by management, inflexible scheduling, and the pushback by Starbucks management, which has been deemed union busting by SBWorkers United, the National Labor Relations Board, and several members of Congress.

Related: As Starbucks customers get younger, its sales continue to skyrocket

“As baristas, we love handcrafting these drinks for you and would love to share in the holiday joy of red cup day,” a Starbucks barista said in a statement on Twitter. “Unfortunately, for baristas, the Red Cup Day experience is understaffed stores, crazy rushes we’re not equipped for, and no compensation for our additional work.”

This national day of strikes in Starbucks stores across America is not the first time baristas have banded together to protest working conditions since the first stores unionized nearly a year ago. Smaller strikes have taken place over the past year, including last month, when workers at the New York City Roastery store walked out in protest of an alleged bedbug outbreak at the store, and other hygiene concerns like mold.

According to reporting from local New York City publication, The City, health inspectors did indeed find “mold-like material” in the ice machines among “several critical violations,” in an inspection on Nov. 9, Department of Agriculture spokesperson Jola Szubielski confirmed.

Two days later, Starbucks vehemently denied that there was a problem, stating in a letter to the union dated Nov. 11, “There is no pest infestation or moldy ice at the Roastery — when the strike started or now [..].”

The baristas on strike have said that they would return to work if they received proof that the alleged bedbug and mold situations had been rectified.

“The health and well-being of our partners and customers are our highest priorities,” a Starbucks spokesperson told The City. “All Starbucks equipment and maintenance procedures are designed to meet rigorous standards — as evidenced by our history of above-standard health ratings and a recent OSHA investigation.”

Starbucks also continues to stoke the ire of the National Labor Relations Board, which has asked a federal court for an injunction for the fourth time this year to compel Starbucks to rehire employees that were allegedly fired for union-related activities, though Starbucks has always denied that they ever fired someone for being active in the burgeoning union group. The federal agency has made similar attempts in lawsuits filed in Buffalo, Phoenix, and Memphis.

The results have been mixed so far: in Memphis, Starbucks has had to reinstate two previously terminated employees, and in Phoenix, a judge ruled over the summer that the company does not have to reinstate three employees that were previously fired for violating company policies.

This time, the NLRB is imploring a federal court in Michigan to enact a “nationwide cease and desist order” to prohibit Starbucks from firing its employees for union activity, as first reported by Vice.

“Given the number and pattern of Starbucks’ unfair labor practices here and elsewhere, particularly discharges, a nationwide cease-and-desist order is necessary to halt Starbucks’ systemic campaign of retaliation,” the NLRB said in a memorandum in response to the filing of the injunction.

Every time allegations of union-busting have come up, Starbucks has denied these allegations, releasing the same statement repeated nearly word for word:

“We respect the right of all partners to make their decisions regarding union issues, whether they favor or oppose representation—and in all union dealings, including collective bargaining, we will always engage honestly and in good faith,” a Starbucks spokesperson told Vice.