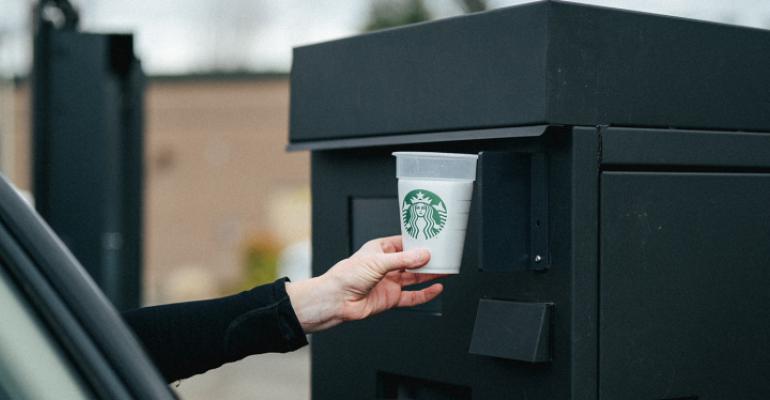 Starbucks
Starbucks' reusable cup rental program costs a $1 deposit, which is returned in the form of a Starbucks credit.
News>Quick Service

Starbucks announced Tuesday that they will be scaling up single-store tests of their reusable cup rental service, Borrow a Cup, at five stores in Seattle this spring, from March 30 through May 31, coinciding with Earth Day.

In partnership with Go Box — which has worked with other smaller chains like Dig on returnable, reusable food and drinkware — the program allows customers to opt in to spend an extra dollar to receive their drink in a reusable cup and then return it by scanning the cup at a contactless kiosk or through Seattle-area pickup service Ridwell. Upon return of the cup, customers get their dollar back as a Starbucks credit and 10 bonus stars on their Starbucks rewards account, and the cup is cleaned and sanitized.

Related: Consumers can now convert bitcoin or frequent flier miles to cash and reload their Starbucks cards to pay for lattes

“Promoting reusability is an important part of Starbucks goal to reduce waste by 50% by 2030,” Starbucks chief sustainability officer Michael Kobori said. “We understand the interdependency of human and planetary Health, and we believe it is our responsibility to reduce single use cup waste.  We will lead the transition to a circular economy.”

The reusable cup is a new design that can hold hot or cold beverages. Once the cups are returned, Go Box collects them from stores every day, cleans and sanitizes them using commercial dishwashing equipment, and put them back into circulation within 48 hours.

Whereas most smaller scale reusable cup rental programs require customers to be in charge of dropping off their food or drinkware themselves, this partnership with Ridwell makes it more convenient.

“We are so excited to be partnering with a fellow Seattle company dedicated to making reuse possible at a much bigger scale,” Caroline Stanford, vice president of marketing at Ridwell, said. “Our members have told us they overwhelmingly prefer to shop with businesses that are invested in sustainable practices – if we can crack the code with programs like Borrow a Cup there is such a huge opportunity to reduce the waste footprint in our communities.”

Although Starbucks has had its own reusable cup discount program for decades, the company said that still the “vast majority” of their drinks are served in single-use cups, with very few being reused or even recycled or composted “due to infrastructure limitations.”

Similarly, Starbucks Korea announced Tuesday a goal of reducing its carbon footprint by 30% and eliminating all single-use cups from stores by 2025. The cups will be discontinued and replaced by cup circularity programs like the Go Box test in Seattle.

“Starbucks Coffee Korea is a leader in sustainability for the company globally, and we are excited to leverage the learnings from this initiative to drive meaningful change in our stores and inform future innovation on a regional and global scale,” Sarah Trilling, president of Starbucks Asia Pacific, said in a statement.

These initiatives are all part of Starbucks’ overarching goals to improve sustainability systemwide. In March, the company announced a new plan to achieve carbon neutrality for its green coffee and to conserve water usage by 50% by 2030.