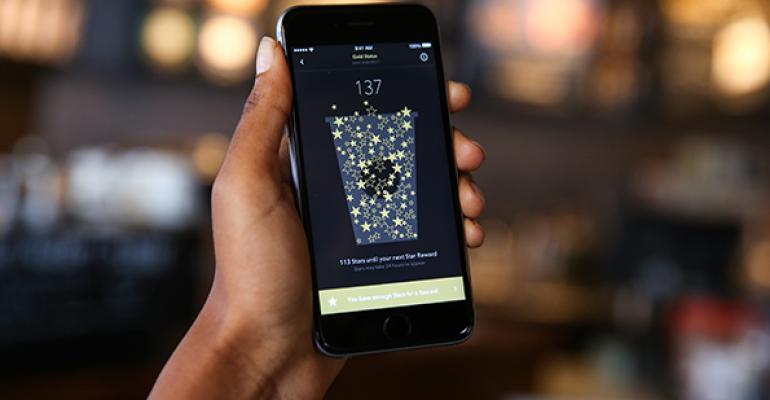 During three-week promotion, customers can receive automatic gold status for a year

Starbucks Corp. launched its revised app and loyalty program on Tuesday, with the first-ever offer of automatic gold status for members who make a purchase before May 2.

Customers can now earn two stars for every dollar spent in the chain’s coffeehouses or on Starbucks products in other stores. It takes 125 stars to earn a reward.

Previously, the loyalty program rewarded visits and it took 12 stars to earn a reward.

Starbucks said the program change was necessary to eliminate transaction splitting, in which customers tried to game the system by buying their drink and food separately, for example, to earn more stars — a practice that slowed throughput.

The move sparked some controversy, particularly among loyal but lower-spending customers who felt betrayed by the perceived emphasis on their higher-spending peers.

Still, Starbucks president and chief operating officer Kevin Johnson said last month that the chain added another 500,000 new loyalty members since the change was announced in February, indicating that not all customers are unhappy about the shift.

To mark the launch of the new loyalty program, Starbucks said members who make a purchase before May 2 will automatically achieve gold status, a level typically earned after collecting a certain number of stars.

In addition to the usual free food or drink rewards, gold members also get perks like access to new “double-star days,” when they can earn four stars for every dollar spent, rather than the usual two stars per dollar.

Existing gold members will receive an additional year of gold status with the promotion.

Under the new program, users can also earn stars for mobile orders — something they couldn’t do previously. Starbucks said it processes more than 7 million mobile orders per month.

The new app has an improved homepage that gives customers a visual on their collected stars, as well as spotlighting the music playing in the store, personalized offers and the ability to track their stars and rewards more easily.

Coming soon is the ability to earn stars by streaming music on Spotify, buying a ride-share through Lyft or using a Starbucks branded Visa card to be rolled out later in the year.

The move was also not without hiccups. Though the chain on Monday warned of possible temporary error messages and difficulties logging in with the transition, customers took to social media on Tuesday to vent their frustration.

Hey @Starbucks updated your app for the new rewards program and lost all my stars and both of my reward drinks. What gives?

Starbucks apologized for the inconvenience and said the issues will be resolved soon. “Once the adjustments to the backend are completed, all customers’ transactions will be accounted for and all earned stars and rewards will be visible and allocated appropriately,” the company said in a statement.

Update: April 13, 2016  This story has been updated with a comment from Starbucks.