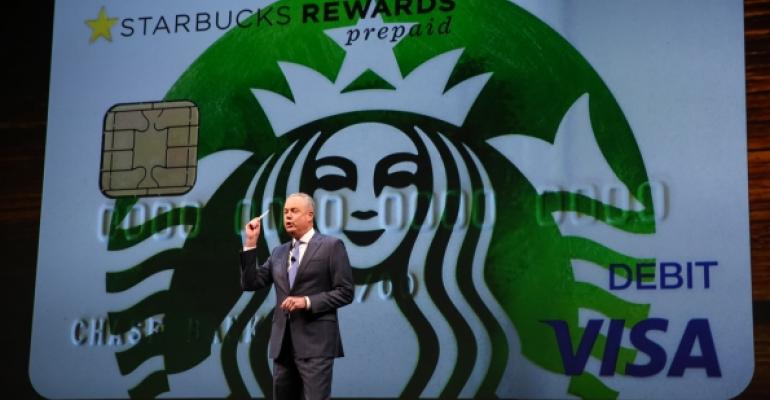 Other new programs tackle hunger in America and voter registration

Starbucks Corp. on Wednesday announced plans to launch a new branded Visa debit card in partnership with J.P. Morgan Chase Bank that will allow users to earn Star rewards with every purchase.

Expected to be available before the end of the year, the new card was unveiled during the Seattle-based chain’s annual shareholder meeting, during which the chain’s top executives reiterated their bullish view on long-term growth in China and revealed new products coming to grocery stores.

Starbucks also outlined social programs designed to build a “purpose-driven workforce” that the company said will reclaim the American dream.

Howard Schultz, Starbucks chairman and CEO, said, “We cannot be a bystander at a time in our nation’s history when government gridlock, economic disparity and partisan polarization continue to stunt our progress.

“In our view, the private sector must contribute more as a economic and social force in partnership with all other sectors.”

The new Starbucks Visa is the next step in the evolution of the chain’s My Starbucks Rewards loyalty program, which is scheduled on April 12 to undergo a shift designed to “level the playing field,” allowing users to earn rewards based on dollars spent rather than visits, said Kevin Johnson, Starbucks president and chief operating officer.

Though the changes announced last month were controversial, Johnson said 500,000 new loyalty members have joined since the announcement. My Starbucks Rewards includes about 12 million active members in the U.S.

The changes to the loyalty program will coincide with an upgrade to the mobile app, which will switch on April 12 to a new design that will be more personalized, making suggestions based on past buying history. The app interface will also allow members to more track the number of stars they have accumulated, how close they are to a reward and how they want to redeem it

And soon guests will be able to earn stars a new way: Using the new Starbucks Rewards Prepaid Visa, a reloadable card that will allow guests to earn stars for all card purchases.

Company officials outlined other initiatives to come this year. This summer, for example, the chain will roll out ready-to-drink cold-brew coffee in grocery and retail stores, as well as a new platform of latte K-cups in flavors like caramel, vanilla and mocha. In the fall, the popular pumpkin spice latte will be a K-cup flavor, as well as peppermint mocha.

Starbucks also this week launched a program called FoodShare that donates ready-to-eat meals to food banks from its 7,600-company-operated stores across the U.S. The program is a collaboration with food-harvest program Food Donation Connection, and hunger-relief agency and food-rescue nonprofit Feeding America.

In its first year, Starbucks estimates it will be able to provide nearly 5 million meals. Scaling over the next five years, the program will take 100 percent of Starbucks that can be donated, which the company estimates will amount to almost 50 million meals by 2021.

Food that cannot be sold to customers but is still viable will be picked up by refrigerated vans every day and delivered to food banks within the Feeding America network.

In addition to feeding the hungry, the program will also divert waste that otherwise would end up in landfills. Feeding America estimates that 70 billion pounds of food is wasted in America every year.

Starbucks is also working to encourage their workers to register to vote.

The chain has made TurboVote, a service that makes registering to vote fast and secure from computers and mobile devices, accessible to all employees. If workers need their registration or absentee ballot sent to them, the company will cover the cost of postage.

The effort is nonpartisan, said Schultz, who used the stage to decry the “dysfunction and polarization” of the U.S. political climate, claiming the country is suffering from an unprecedented lack of leadership.

“I have always viewed the American dream as a reservoir. It has constantly been replenished with the values and work ethic of the American people,” he said. “Sadly our reservoir has run dry.”

As a result, Schultz said public companies like Starbucks and average citizens must “do everything we can to reclaim the American dream and fill that reservoir up again, not with cynicism, but optimism.”