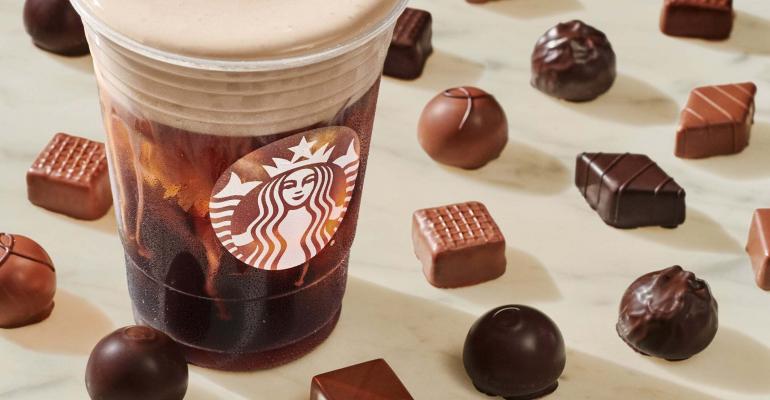 “When creating this beverage, we wanted to bring our customers a drink that would transport them back to their favorite summer memories with each sip,” Rosalyn Batingan, a representative on Starbucks’ beverage development team said in a statement. “The classic combination of coffee and notes of chocolate, along with the malt flavor in the chocolate cream cold foam, are reminiscent of a chocolate malted milkshake or that last bit of melted chocolate ice cream on a warm summer day to recreate the sweet, creamy flavor of summers past.”

Starbucks launched its cold brew lineup in 2015 and since then it has become a staple of the menu, with cold beverages beginning to outperform traditional hot coffee drinks, Starbucks executives said in a recent earnings call. In fact, in Q3 2021, cold brew, nitro and refresher drinks represented 74% of beverage sales for Starbucks.

Besides the chocolate cream cold brew as the star of the lineup, Starbucks also announced two colorful new desserts for summer: a lime frosted coconut bar made with coconut, oatmeal, mini white chocolate chips, and lime frosting; and the unicorn-shaped cake pop that’s returning for the season. Starbucks is also releasing a lineup of colorful new drinkware for summer in vibrant and iridescent pink and purple hues.