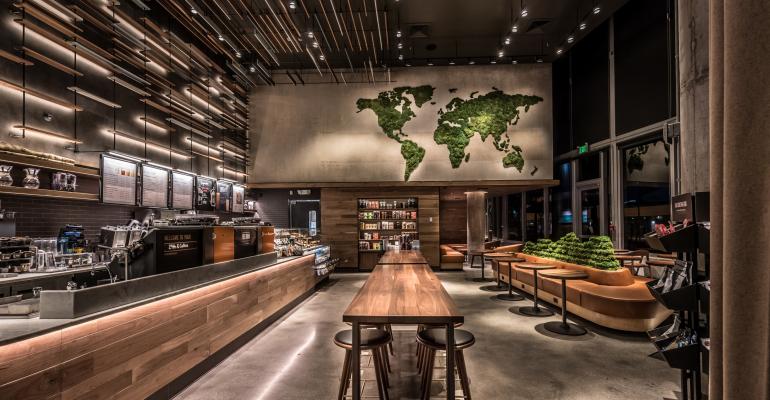 Starbucks
The company has 2,300 Greener Stores in North America and hopes to reach 10,000 globally by 2025.
News>Quick Service

The Shanghai store will have a circular-economy focus on reducing waste, reuse and recycling and similar units are coming to Southern California and Seattle

Starbucks is expanding its “Greener Store” program to China this month with a new “planet positive” design that will focus on reducing waste, reuse and repurposing materials.

The Seattle-based chain first announced its plan to develop its Greener Store units in partnership with the World Wildlife Fund in 2018. Now Starbucks has more than 2,300 Greener Stores in the U.S. and Canada and has set a goal for reaching 10,000 globally by 2025 through new builds or retrofits.

The greener stores have been designed to use 30% less energy than prior units — an amount that Starbucks says equals the electricity use of more than 30,000 homes per year. Greener Stores also reduce water use by 30%, or more than 1.3 billion gallons annually.

The new experimental Greener Store in Shanghai — the company’s first outside North America scheduled to open Sept. 30 — will focus on circularity, or the “three Rs” of reducing, reusing and recycling.

Company officials said about half of the Greener Store interior can be recycled, upcycled or is biodegradable, including the use of reclaimed wood from the renovation of other Starbucks stores.

Paper receipts and menus will be replaced with digital options. Reusable cups will be standard issue, rather than single-use cups.

More than half of the menu will be plant-based, with oat milk as the default for most beverages.

The iconic green aprons worn by team members will be made from former Starbucks cups. And the store will feature a Circular Lifestyle Lab with themed exhibits by emerging artists.

The company is planning to open two more similar Greener Stores in Southern California and in Seattle. The goal is to extend the sustainability measures to future units operated by licensees and joint partners, the company said. And international expansion of the program will continue in Japan, the United Kingdom and Chile.

Starbucks has been working with Arizona State University to develop the ASU-Starbucks Center for the Future of People and the Planet, which is scheduled to open in December. There, the chain hopes to test new innovations for Greener Stores and offer inspiration for others to build in a way that minimizes impact on the planet.

“Starbucks expansion of the Greener Stores program demonstrates a continued commitment to environmental stewardship and innovation,” said Sheila Bonini, senior vice president, private sector engagement for the WWF, in a statement. “By making this program open source, and expanding it globally, Starbucks is creating a path toward a resource-positive future within their own walls and beyond.”

As part of the Greener Store effort, Starbucks has been investing more in renewable energy. Earlier this year, the chain completed installation of a 1-megawatt solar array at the Carson Valley Roasting Plant and Distribution Center, one of the chain’s largest roasting sites. The on-site solar energy will provide about one third of the facility’s electricity needs, the company said.

Other sustainability measures are in place in 90% of the chain’s company-operated units, including recycling, composting, offering Grounds for Your Garden to consumers who compost at home, and Starbucks FoodShare, which diverts unsold menu items to food banks.