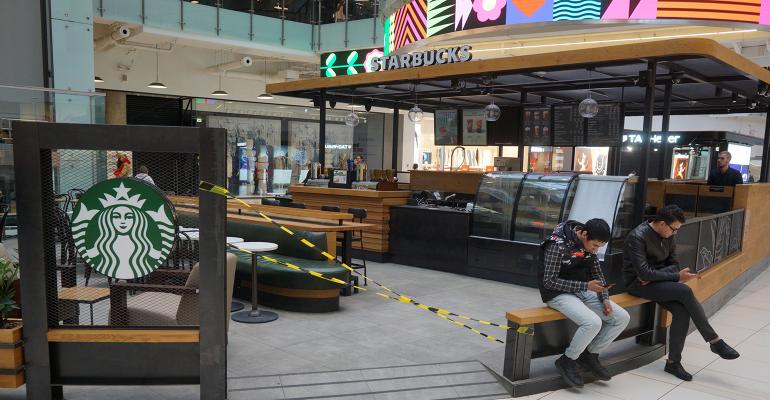 Konstantin Zavrazhin / Getty Images
In an April photo, people sit on benches outside a closed Starbucks in Moscow.
News>Quick Service

Coffee brand says it will support nearly 2,000 workers with 6 months of pay

Starbucks Corp. will exit the Russian market in the wake of that country’s invasion of neighboring Ukraine, the company said Monday, after earlier suspending business activity in the country.

The Seattle, Wash.-based coffee chain, which has about 130 licensed stores in Russia, said it would continue to support the brand’s nearly 2,000 workers in Russia with pay for six months “and assistance for partners to transition to new opportunities outside of Starbucks.” It had been in the market for about 15 years.

Starbucks on March 8 had suspended business activity in Russia, including the shipment of branded products, along with a number of other Western businesses. Starbucks entered the Russia market in 2007.

Last week, Chicago-based McDonald’s Corp. said Thursday it had agreed to sell its restaurants in Russia to existing licensee Alexander Govor and its about 840 stores in the country would be rebranded. About 15% of its units were franchised.

Kevin Johnson, former president and CEO of Starbucks, said in March, after condemning the “unprovoked, unjust and horrific attacks on Ukraine,” that “our licensed partner has agreed to immediately pause store operations and will provide support to the nearly 2,000 partners in Russia who depend on Starbucks for their livelihood.”