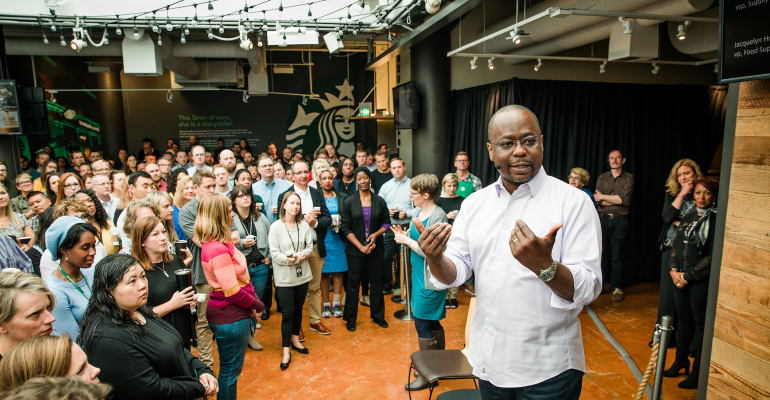 "It was an eye opener," says a barista in Tennessee

The four-hour training session, which was closed to the public and media, was sparked by a racial profiling incident in April at a Starbucks location in Philadelphia.  The curriculum included a short film about racial discrimination in public spaces created specifically for Starbucks by documentary film maker Stanley Nelson.

The film describes the civil rights movement and includes testimonials from African-Americans who continue to feel unwelcome in a society that has banned discrimination for decades. Many talked about feeling uncomfortable when riding the subway or buying a sandwich in a fast-food restaurant.

The training session was prompted after two black men were arrested for trespassing at a Starbucks location in Philadelphia. The men had not made a purchase and were denied use of the bathroom by a manager. They were handcuffed and taken away by police before a stunned crowd of customers. The men have since reached an undisclosed financial settlement with Starbucks.

Executives have called the incident reprehensible. The company vowed to dedicate resources to ensure no one else is discriminated against in its cafes, which have always branded themselves as “third place” safe havens for the communities they serve. The anti-bias training on Tuesday, which involved 175,000 employees, is just the beginning, Starbucks has said. The Seattle-based chain’s support center in that city also shut down so employees could take part in training sessions.

Here’s how some Starbucks partners reacted to the training, held at locations across the country. Comments were curated by Starbucks’ Newsroom team, not Nation’s Restaurant News:

Tafsir “Taz” Mbodje, a Starbucks district manager in New York City, said the training sessions entailed several powerful moments, including a discussion about “Who is not in our stores?” He said it reminded him that several of his cafes in the New York area removed power outlets to prevent people from sitting and charging their devices for long periods of time.

“It really made me think of customers who, over the years, we may have left out unintentionally with our policies,” Mbodje  said. “People are working at Starbucks. Editing videos. Meeting with prospective clients. When we shut our outlets, those customers no longer had a place to charge their phones, their laptops and themselves.” In Clarksville, Tenn., barista Hailey Dowell said she was shaken by the Nelson’s documentary.

Starbucks responds to racial profiling accusations: ‘This is not who we are’