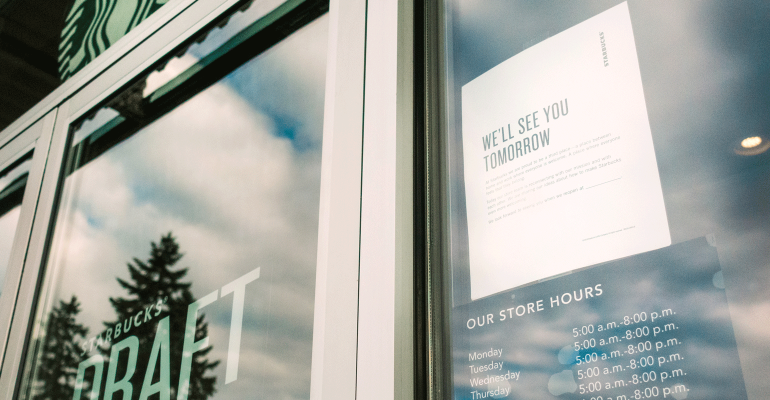 Starbucks regulars looking for a cold brew or latte Tuesday afternoon might have to turn to a different coffeehouse to get their fix.

The Seattle-based coffeehouse operator is closing roughly 8,000 company locations today to conduct racial-bias education with more than 175,000 workers. Licensed Starbucks cafes, including those inside grocery stores and college campuses, will remain open. The locations will close around 2 p.m. local time and reopen on Wednesday. Closing times may vary depending on the location or market.

The four-hour training session was sparked by a racial profiling incident last month at a Starbucks location in Philadelphia. Last week, the company said the training session will be closed to the media. However, Starbucks released a five-minute, sneak peek video describing what employees will learn today.

The sessions will include messages from Starbucks president and CEO Kevin Johnson, executive chairman Howard Schultz and COO Rosalind Brewer, as well as an appearance by the rapper Common. Employees will reflect and have frank discussions “on the realities of bias in our society,” Schultz said.

Prior to the training sessions, Schultz released an open letter to again apologize for the “reprehensible” actions that led to the arrest of two black men in Philadelphia. The men were waiting for a friend at a Starbucks location and had not made a purchase. One of the men asked to use the restroom and was denied. They were later arrested for trespassing.

The arrest was caught on video and went viral. Protestors eventually swarmed the location, asking customers around the nation to boycott Starbucks.

“The incident has prompted us to reflect more deeply on all forms of bias, the role of our stores in communities and our responsibility to ensure that nothing like this happens again at Starbucks,” Schultz said in the open letter. “The reflection has led to a long-term commitment to reform systemwide policies, while elevating inclusion and equity in all we do. Today we take another step to ensure we live up to our mission.”

Talk to us: Did you attend one of the sessions? Please contact Nancy Luna at [email protected] to let her know what you learned.

Starbucks responds to racial profiling accusations: ‘This is not who we are’