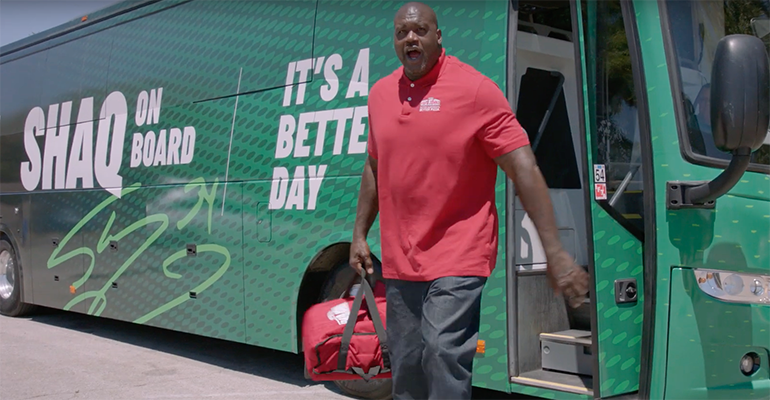 It's a "Better Day" for the beleaguered pizza brand

The commercial, titled "Better day in the boardroom" plays over the soundtrack of Feel Me Flow by Naughty by Nature. Viewers see O'Neal at Papa John's headquarters palling around with employees, then at a restaurant where he's tossing pizza dough, later he's looking serious at the company's boardroom and finally he's seen feeding school children.

This commercial is the first of several spots that began airing nationwide on September 5 featuring O'Neal. It's part of the Papa John's "Better day" campaign, a spin on the brand's original slogan "Better ingredients. Better pizza."

John Schnatter, who had long been the face of Louisville, Ky.-based Papa John's, had a very public fall from grace last year amid accusations of using a racial slur and making other inflammatory comments. He was later forced to resign, not without making some noise, and a new CEO was named just last week after some significant leadership changes since mid-2018.

Sports teams had initially suspended partnerships with the brand last year after Schnatter blamed declining unit sales on the National Football League's reluctance to stop players from protesting on the field after the chain's longstanding relationship with the NFL. A partnership with Major League Baseball was also suspended for a time, but was quietly reinstated for the 2019/2020 season. The "better day" campaign is another step toward a brand comeback.