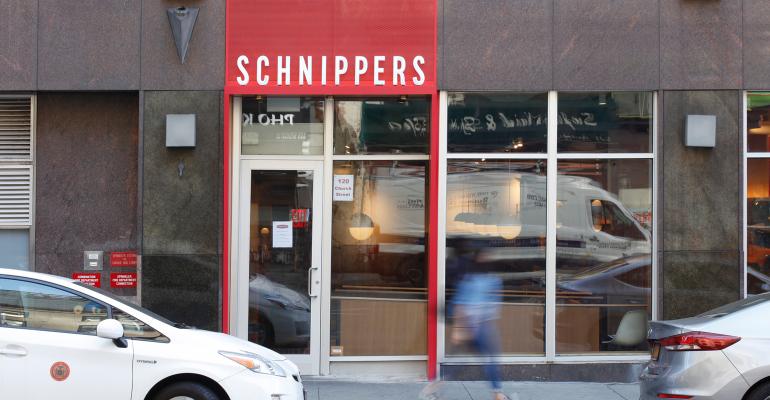 Schnippers Quality Kitchen, a five-unit limited-service chain in New York City, has done away with much of the paper and plastic in two of its restaurants.

Instead, Schnippers is serving its burgers, sandwiches, hot dogs and salads on china at the two locations, and is giving guests proper silverware with which to eat it.

“We sort of felt that disposable tableware for dining in just wasn’t doing our food justice,” said Jonathan Schnipper, who runs the restaurant with his brother Andrew.

The brothers also founded Hale and Hearty Soups, a fast-casual chain in New York City that has 29 units. They sold the chain in 2006, three years before opening Schnippers, which the founders see as a new generation of fast casual.

“Because of the food that we’re doing and the effort that we put into it, and the level of ingredients, we’re doing everything a full-service restaurant would do except have a waiter or waitress,” Andrew Schnipper said.

“Our burgers come from a local supplier called Pat LaFrieda, and we put every ounce of quality and love and attention into our burgers as fine-dining establishments do,” Jonathan Schnipper said. “And we just felt like taking a burger like that and putting it in a paper boat was just sort of downplaying the experience that we wanted our customers to get.” Schnippers customers have always ordered and paid at the counter, and had food delivered at the table, using buzzers with radio frequency signals, similar to Panera Bread, to let the kitchen know where customers are sitting.

“It works very well with today’s customer,” Andrew Schnipper said, noting that it saves customers the cost of a tip, and that the food is casual enough that it doesn’t require a server. “We feel that by giving them the full-service experience without some of the downsides of full service, people will perceive us as an inexpensive restaurant as opposed to an expensive fast-food restaurant.”

The average check at Schnippers is $13 to $14, and the menu is fairly extensive. Although about half of the 800 or so meals sold in each restaurant per day includes a hamburger — the most popular is a simple cheeseburger with lettuce, pickle and onion — the chain also serves grilled and fried chicken sandwiches, fish and chips, grilled cheese, deli sandwiches, sloppy Joes, mac and cheese, hot dogs, milkshakes and cookies.

About 60 percent of meals are sold at lunch, the brothers said.

They said the expense of the upgraded tableware is minimal so far, with the initial cost of buying china and silverware largely offset by not having to buy a continual supply of paper and plastic. They did install dishwashing machines, however, and their hired dishwashers are working longer hours. Jonathan Schnipper said breakage was the largest issue, but the plates and bowls are sturdy enough that they’re not seeing much chipping.

So far, customer feedback has been good.

“We got a lot of positive comments from customers, so it seems to be going over well,” Andrew Schnipper said.

An earlier version of this story misidentified Andrew and Jonathan Schnipper in a caption. Andrew Schnipper is on the right.
TAGS: News Operations
0 comments
Hide comments
Related
Sponsored