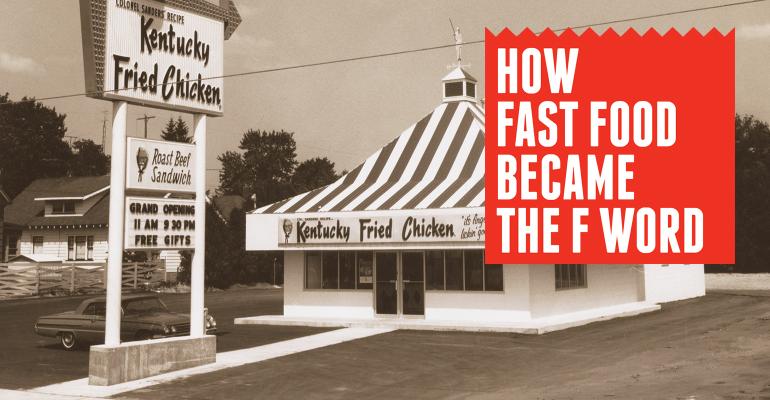 QSRs like Kentucky Fried Chicken fed hungry post-war Americans food that was quick, affordable and consistent — but the fast-food label had its challenges.
News>Quick Service

The rebirth of fast food

Brands old and new redefine the spirit of the segment

For years, pundits have declared the demise of American fast food.

The quick-service restaurants that emerged and grew rapidly during the post-war boom of the 1950s and 1960s were once celebrated as places where families could dine together. The food was quick, affordable and consistent.

Related: From the editor: The truth about quick service

We knew their jingles. We collected their toys. The flavors they represented were as familiar as mom’s home cooking.

But by the turn of the millennium, fast food had become an F word in the industry — a term to be avoided at all cost.

Books like “Fast Food Nation: The Dark Side of the All-American Meal” and movies like “Super Size Me” opened consumers’ eyes to a world where fast food had become known for little more than soulless uniformity and shortcuts.

The consistency that fast food promised was only possible at scale with the help of ingredients that had been frozen, freeze-dried, canned or dehydrated. Fast food came to represent mass production, chemically enhanced flavors and menus riddled with salt, fat, calories and preservatives. Those in the kitchen were not so much cooking as reheating and assembling.

By its very definition, fast food had become the junk of the food world. The Merriam-Webster definition of the term includes food that is “designed for ready availability, use or consumption and with little consideration given to quality or significance.”

But that was before the fast-food revolution.

Over the past decade, consumer tastes evolved. Diners wanted  food that was freshly made and healthful. And the industry responded.

First came the fresh-Mex chains, like Baja Fresh Mexican Grill and later Chipotle Mexican Grill, which built menus around fresher ingredients that had never been frozen and didn’t come out of cans.

The result was a new generation of limited-service concepts now recognized as a separate segment: fast casual.

But the quick-service segment today still represents some 270,000 restaurants across the country, with combined revenue of about $190 billion, according to market research service First Research, though it’s not clear whether that includes chains that would be deemed fast casual.

Observers have repeatedly predicted that the rise of brands like Chipotle would result in the fall of chains like McDonald’s, but the evidence shows otherwise. Over the past two years, same-store sales have climbed for publicly traded quick-service brands, while fast-casual chains have reported declines.

“Traditional QSR are not going away, they’re not losing market share and they are still fun,” said Stephen Goldmann, partner in the recently launched quick-service brand Starbird. “Fast casual is really a made-up term, and what we are seeing is an evolution of fast food.”

While few consumers recognize the distinction, what they love about fast-casual concepts is their freshness and customization. Ingredients tend to be less processed, and fast-casual brands meet their lifestyle needs, whether vegan, gluten-free, low-carb or high in superfoods.

But the fast-casual segment is built around the notion that guests are willing to pay more for quality food. And, just like quick-service chains, fast-casual players are learning that growing the model to scale means making certain tradeoffs, said Goldmann.

“The difference is that they are not willing to totally wipe out quality or freshness, because that’s what the customers want,” Goldmann said.

Across the fast-food world, meanwhile, legacy brands from McDonald’s to Wendy’s have scrambled to borrow from their fast-casual compatriots by shedding artificial ingredients and making the switch to better-quality meats, raised without antibiotics and without cages or crates.

Gone are the immovable plastic benches of the former fast-food world. Today, quick-service restaurants boast touchscreen kiosks, comfortable seats and free Wi-Fi. Guests can order and pay by smartphone or have their food delivered.

The changes are also radically altering menus. This year, McDonald’s introduced Signature Crafted sandwiches, with ingredients like guacamole, Sriracha sauce and kale. Next year, the chain will start making Quarter Pounders with fresh beef to order.

Arby’s has been doubling down on meats, offering premium varieties like venison, porchetta and lamb.

And designs are getting slick overhauls. Taco Bell is opening snazzy new prototypes that fit into flexible urban footprints. Some are “cantina” units that offer alcohol, open kitchens, shareable appetizers and premium plating.

Consumers may not see the difference between fast food and fast casual, but landlords certainly do. Positioning can make a big difference as growing chains seek the right real estate.

Some traditional quick-service players have grappled with their positioning, debating whether they want to lean in to fast casual or embrace a redefined place in fast food.

“We’ve been thinking about this a lot,” said Andrea Cherng, chief marketing officer of the nearly 2,000-unit Panda Express. “We think of our guests as being our compass, and our guests are telling us they’re invested in convenience and quality.

Therein lies the challenge, said Pierre Panos, founder of 15-unit Fresh To Order, which calls itself “fast fine” and is at the premium end of fast casual.

As the quick-service world has evolved and stepped up quality and convenience, so has the fast-casual segment, he said.

“I don’t believe fast food will ever be able to get anywhere near the quality of good fast-casual chains out there,” Panos said. “Fast food is in a very difficult place.”

Improving food quality and making investments in building design is expensive for operators, he said.

“But people want fast food to be inexpensive. If you’ve evolved your food and your buildings at some expense, you can’t keep the same price,” Panos said.

Founded in 2006, Fresh To Order aims to be accessible fine dining. Proteins are cooked to order from raw, including high-end ingredients like salmon, calamari, prime beef and ground bison.

In cities like Atlanta, Fresh To Order’s entrées generally range from $10 to $15, including dishes like grilled prime steak medallions with a balsamic-cabernet reduction, garlic-Jack grit cake and baby greens for $14.90.

Keeping prices low has also been a challenge for the young Top Round brand in Los Angeles.

Co-owner and executive chef Steven Fretz fully embraces the term fast food. In fact, Top Round attempts to capture a certain nostalgia for what fast food once was. Top Round’s high-quality ingredients mean a higher check average, a factor it must educate its customers about.

With a fresh franchising push and three new units to open before the end of the year, Fretz said the company thought long and hard about its positioning.

“It’s been hard trying to figure out whether we’re fast food or fast casual, but we’re generally fast food. Our sandwiches are right in line with Chick-fil-A or In-N-Out Burger,” Fretz said. “We didn’t want to put our stake in the game being fast casual. We wanted to be improved fast food.”

Still, the concept gets “dinged” at times for its price point, he said. The most expensive Top Round sandwich in Los Angeles is about $7.99, with fries and a drink an additional $3.99.

That’s because the choice beef, raised without antibiotics, is roasted in house, and Top Round uses artisanal buns that cost more than those at traditional quick-service players, he said. Even the “Cheese Wizz” that tops the Beef-and-Cheese sandwich is made in house.

It’s food that Fretz, who has a fine-dining background, is proud to serve. But today’s consumers need to learn to think differently about fast food.

“It’s a hard thing to get into people’s heads that it’s OK to pay $7 for a sandwich, but you have to educate them,” he said. “We could have easily said we were fast casual, and that we’ll take 20 minutes to give you your sandwich, shake and fries, but nobody wants that.”

Indeed, some see speed of service as the differentiator that will help quick-service stave off the fast-casual threat.

Birdcall in Denver is designed to get guests in and out in minutes, while serving a made-to-order chicken sandwich, fries, salads or shakes for an average check of less than $10.

“I call Birdcall fast food; it’s just of a higher quality,” Newlin said. “I think fast food can be a great term, as long as they’re doing it the right way. We’re getting so busy and life is so busy. But being able to get quality in faster time is what we’re all looking for.”

Birdcall’s customers order and pay from a bank of digital kiosks outside the restaurant. Inside, they retrieve their freshly prepared food from hexagon-shaped bays. Rather than having six front-of-the-house employees, the restaurant has just one who serves as a greeter and “delivers hospitality,” Newlin said.

The labor savings has allowed the restaurant to keep breakfast sandwiches as low in price as $3.50, he said. The company can also invest in the restaurant’s design.

“I don’t take my girlfriend to McDonald’s, not because of the food, but because it’s not a nice atmosphere for a date,” Newlin said. “But at Birdcall, we paid a lot of attention to design.”

Meanwhile, concepts like Starbird, in the San Francisco Bay Area, want to be known for speed, low prices and the “added values of well-made and well-sourced,” said Rachel Kalt, Starbird’s creative director.

Starbird debuted in 2016 and calls itself “super-premium fast food.” The menu includes free-range chicken raised without antibiotics, organic eggs and coffee brewed to order.  The three-daypart restaurants have a contemporary design and offer mobile ordering and carside delivery. The average check is around $6 at breakfast and $9 to $11 at lunch. Starbird expects to have four units by the end of 2017, with another three to five locations in 2018. The concept is designed for rapid growth.

Fast food as a segment may have a tarnished perception due to cuts in quality over the years, but brands like Starbird hope to change that, Kalt said.

“We embrace, albeit qualify, our positioning as fast food, because we recognize that fast food, as a framework, has a lot of good,” she said. “Fast food feeds millions of people. It is accessible, approachable, affordable and highly convenient. For better or worse, fast food is a staple of nourishment for many, many families.”