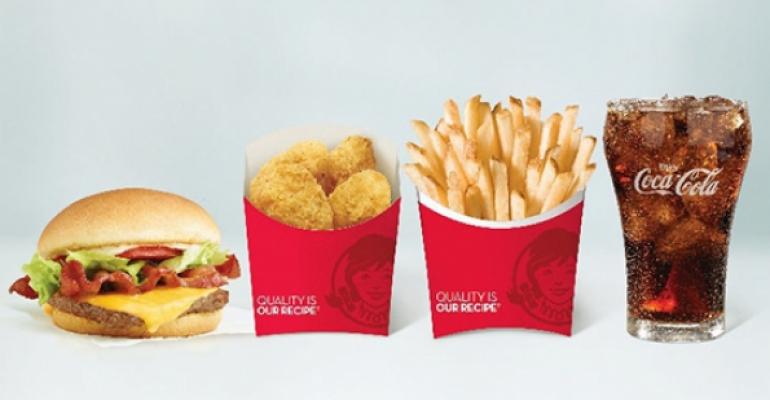 Despite an improving economy and low gas prices, quick-service chains are working to win back value-conscious consumers with a renewed focus on discounting.

On Monday, Wendy’s unveiled a 4 for $4 Meal that includes a Jr. Bacon Cheeseburger, four chicken nuggets, small fries and a drink, priced at $4.

The company is targeting lunch customers with the unusual four-item bundle, suggesting in a release that it would be a game changer.

“At Wendy’s, we believe that everyone deserves a delicious lunch, no matter how much they have to spend,” Kurt Kane, Wendy’s chief concept and marketing officer, said in a statement.

That deal comes on the heels of McDonald’s double cheeseburger and small fries combo, priced at $2.50, over the summer. And it follows Burger King’s successful 10-piece chicken nugget deal, priced at $1.49, that it offered periodically over the past year.

The offers reveal a stark reality among quick-service restaurants: Many consumers view them as low-cost options and will gravitate towards concepts with the strongest value offerings.

“Whether we like it or not, that’s the reality in the United States,” said John Gordon, a San Diego-based restaurant consultant. “Unfortunately, they’re chasing this very thin veneer of customers that aren’t very brand loyal, and will change from one brand to another.”

For years, many quick-service chains relied on value menus to lure price-conscious customers. For some chains, those discounts worked well to maintain traffic during the recession.

But food cost increases in recent years forced many chains, like Wendy’s and McDonald’s, to back off the dollar price point. Higher costs, particularly for beef, made $1 cheeseburgers more difficult to justify.

In 2013, Wendy’s shifted its 99-cent Value Menu to a “Right Price Right Size” menu, with some items priced up to $1.99. The same year, McDonald’s added an “And More” to its Dollar Menu. As some reports suggest, the number of items that are actually $1 has been steadily shrinking.

Executives from both chains have been forthcoming in their assessment of the impact of those shifts.

“Some of the challenges we’ve had in the U.S. have been somewhat self-inflicted,” McDonald’s CEO Steve Easterbrook said during a conference call with investors this spring. “We moved away from the Dollar Menu and didn’t replace it with significant enough value in the eyes of consumers.”

At the same time, Burger King saw strong sales from its 10-piece nugget deal. The company and its franchisees have suggested that the nuggets have been an add-on item, or that they have generated sales of fries and drinks. Burger King also has an ongoing menu offering a choice of two sandwiches for $5.

That has put pressure on both McDonald’s and Wendy’s to respond. “This is an unfortunate aspect of being publicly traded,” Gordon said. “Those same-store sales numbers are so valued. There are a lot of races to the bottom to attain them.”

The demand for discounts among quick-service customers comes despite an improving economy that in theory should lessen demand for lower-cost items. Gas prices have fallen, the economy is adding jobs and housing values have risen.

But at the same time, some executives suggest that perhaps the environment isn’t as strong as it seems. “The environment is still lumpy and bumpy,” DineEquity CEO Julia Stewart said at Nation’s Restaurant News’ MUFSO conference last month. “I don’t see that changing anytime soon.”

Domino’s CEO Patrick Doyle said during the company’s recent earnings call that it would risk traffic declines if it increased prices, even though the pizza chain is currently generating double-digit same-store sales growth.

“I don’t think you can take aggressive price in this economy right now and not expect that it’s going to hit your order counts,” Doyle said.