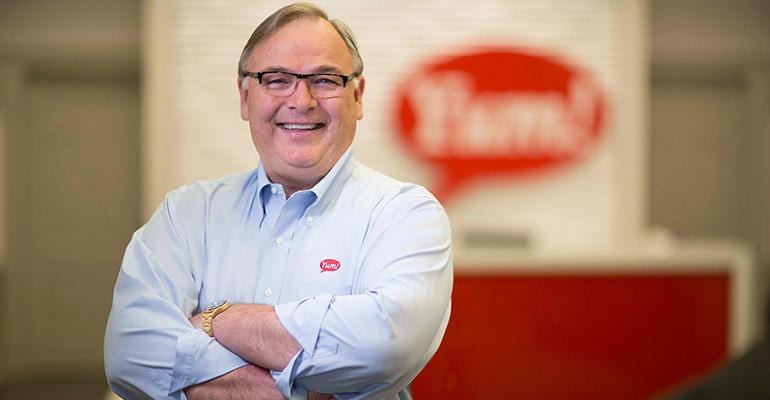 Greg Creed on how to market any brand, not just a restaurant.
News>Quick Service

A Q+A with Greg Creed, former CEO of Yum Brands, on how to market a business

Greg Creed, the former Yum Brands CEO who was chief marketing officer during Taco Bell’s turnaround in the mid-2000’s, is making it his mission post-retirement to help make marketing more accessible. Last week, he and current Yum CMO Ken Muench released a book outlining what they see as marketing keys to success.

Read this exclusive Q+A with Greg Creed about his marketing keys to success. This interview has been edited for length and clarity.

Nation’s Restaurant News: You were a marketing executive for decades, ending with the turnaround of Taco Bell at Yum Brands in the mid-2000’s. Why write a book as the first major thing post-retirement?

I think marketing is simple but not easy. And so, Ken and I have worked together for well over a decade and we had processed this framework code which eventually became called RED, and we have executed the framework and thought about it and evolved and changed and tweaked it and it works. There are a lot of books that are written by academics who don’t have any practical knowledge. What we tried to do in the book was to find that really nice balance of scientific rigor with practical application that equals great results.

I guess the last reason is, and the only way to write the book at all, all the money from the book goes to the Yum Foundation to support team members and the communities in which Yum operates. So that was that was also a critical reason.

NRN: So, what exactly is this framework?

GC: It’s called RED which stands for relevant, ease and distinctiveness, and under relevance are postural and functional relevance, social relevance, and cultural relevance. Ease is obviously all about being easy to access, easy to use or interact with. And then distinctiveness is, do you stand out in a very crowded market? Can you make sure that everything you do becomes distinctive and also consistent? Consistency is one of the key things … it’s probably the one of the most important elements in cultural relevance. It’s the thing that most distinguishes okay brands from great brands. Great brands have tapped into … whatever the cultural psyche is.

Here’s an example. When apartheid was coming to an end, there was this whole idea of South Africa becoming this rainbow nation and everyone was coming together to be one nation rather than a nation that was divided. KFC made some brilliant advertising work at the time. And I think it’s representative of unity, like if you make a big bucket of chicken for the unity of a nation. Well, what happened was, at the time, “unity” evolved from the rainbow nation to the next generation of people wanted to be seen as individual, distinctive, entrepreneurial, and KFC did not pivot with that cultural shift; they were talking about the rainbow nation. And yet the cultural shift occurred into individualism. KFC missed that cultural shift and sales started going backwards. It wasn’t until the KFC team went to South Africa and immersed themselves in the culture and lived in people’s homes and spoke to poets and authors and musicians and designers that they realized that this shift had occurred. The great news is that KFC then pivoted that shift into making work for individual achievements.

So, there’s an example of the critical importance of cultural relevance.

NRN: What are some ways for restaurants to utilize these skills with employees they currently have?

GC: One of the things I really wanted for the book was to be provocative. What we do in the book, is at the front of the chapters we say, “ask yourself these questions.” And if you solve these questions, great. If you can’t answer them, it’ll probably be pretty insightful. So, while we were provocative around things like “does every brand has to have a social purpose now?” at the same time we wanted to make sure it was incredibly accurate [to put actions into place]. We’ve tried to be practical.

By sending out questions that, if you can answer, that’s great, but if you can’t answer, it probably means you’ve got some work to do and places to dive into to try and get back. One of the big challenges for brands to work out is if they have an issue with one or two or three of the letters. Because sometimes what happens is, people might have something that’s not relevant, they just need to double down on making it worse.

For example, in the late 1990s Taco Bell had a campaign featuring a Chihuahua. Taco Bell was winning every marketing and advertising award known to mankind for it. The problem was the brand wasn’t relevant and so transactions declined. Now, no one ever told this story because I guess they were happy to win the awards, but what happened over the time of the Chihuahua campaign was the brand … doubled, tripled down on the significance, which was great, but it wasn’t relevant, and therefore sales and transactions declined. When I came into Taco Bell’s team in 2001, we realized that we had to make the brand more relevant, because it was very distinctive, but no one used it because the food was messy it wasn’t portable, all of those things that make your brand relevant.

NRN: You did write this book after leaving Yum. How did CEO David Gibbs react to you giving away what some might consider to be company secrets?

GC: I give David Gibbs a lot of credit. A lot of people were wondering why we were giving away the family secrets. And there are a couple of answers. One is, Ken [Muench] and I just so fundamentally love marketing that if we can help marketers across the world be better, that that’s kind of a legacy that we want to leave. Secondly, I think David recognizes that a book like this should hopefully enhance the marketing reputation of Yum and the brand, and hopefully attract great people or people who want to be great marketers to come and work at Yum.

We didn’t give it all away either. We gave enough of the recipe. We just want to make marketing simple but not easier. I think it is a great recruiting tool.

NRN: What’s next for you?

GC: So, I’ve just founded what I’m calling Creed Unco, and we’re the unconsulting consulting company. And it’s small. We’ve only just started and it’s a few of my friends and colleagues from when I was at Taco Bell who are retired or semi-retired. We want to be consulting in three areas, the three areas that I’m most passionate about: brand building, franchising, and then culture and leadership.

Creed’s book is called “R.E.D. Marketing: The Three Ingredients of Leading Brands,” and explains the pillars of marketing as Creed has seen over his tenure in the advertising world and the restaurant industry.