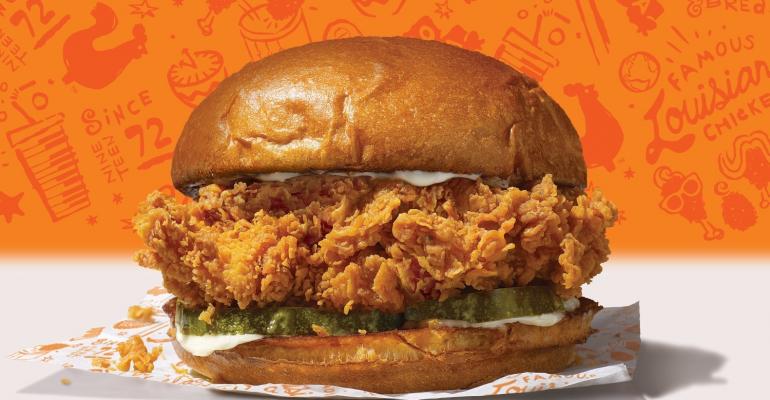 Popeyes: Units are hiring more employees to prepare for return of chicken sandwich

Popeyes Louisiana Kitchen restaurants are shoring up staff in preparation for the return of the brand’s new chicken sandwich, which sold out over the summer after an epic social media spat between the Southern brand and Chick-fil-A.

“Popeyes can confirm that across the system, franchisees have worked to increase staffing to be ready to serve guests once the chicken sandwich returns,” the company told Nation’s Restaurant News on Thursday.

The statement was triggered after the CEO of Sun Holdings Inc., which operates 150 Popeyes, told Bloomberg this week that his units are hiring about 400 additional workers to help with demand when the sandwich returns in early November.

On Monday, Oct. 28, the brand confirmed that the sandwich would return Nov. 3.

But then, the internet took over.

Brands from Wendy’s to emerging concepts such as The Crack Shack weighed in. McDonald’s and Jack in the Box took advantage by introudcing limited-time chicken sandwiches after Popeyes units sold out of its new menu item.

According to market research, Popeyes should be motivated to get the item back on the menu.

The brand’s traffic was up 218% over their previous July numbers according to Pacer.ai’s data analysis. Traffic continued to rise after the sandwich was sold out Aug. 27, with the last few days of the month continuing an upward trajectory

Popeyes has more than 3,000 restaurants in the U.S. and around the world.

Update, Oct. 28: This story was updated to include the confirmed return date of the Popeyes sandwich.