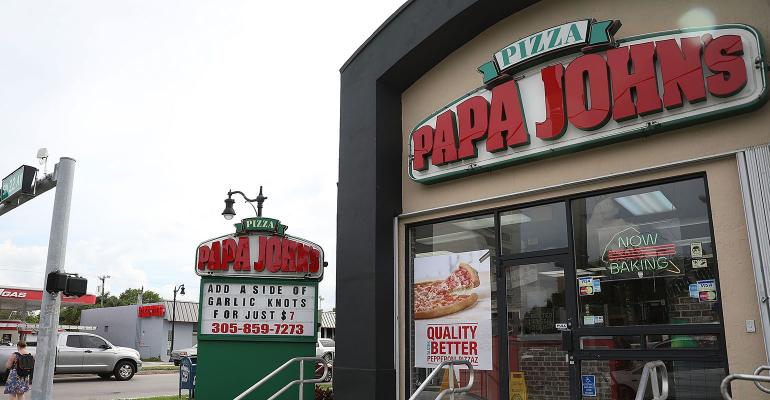 Shares of Papa John’s International Inc. fell Friday after a news agency reported the pizza chain was abandoning plans to sell itself to a private-equity company.

Papa John’s stock prices fell nearly 9 percent Friday, to $38.51 a share from Thursday’s close of $42.29, after Reuters reported early in the day that the Louisville, Ky.-based brand had received disappointing valuation results from several interested parties, a source told Reuters.

Papa John’s share price has been on a rollercoaster since takeover rumors began in October in the wake of a report in the Wall Street Journal that indicated Trian, headed by activist investor Nelson Peltz, was an interested party. The company’s stock price popped more than 6.5 percent after that report and has seen ups and downs in the months since.

A Papa John’s spokesperson declined to comment on Friday’s report.

The pizza chain is in the midst of a legal battle with ex-CEO John Schnatter, who resigned as chairman in July after making controversial racial remarks. Schnatter still owns 30 percent of Papa John’s and has a seat on the board.

Most recently, a Delaware court ordered Papa John’s to hand over internal documents to Schnatter because he is still the largest stockholder of the company, in a lawsuit that the company initially called “needless and wasteful.” In an ongoing power struggle with Papa John’s, Schnatter is seeking to prove that his former company is “mismanaged.”

Given the legal back and forth, analysts expressed skepticism that a buyout would happen soon.

“We do not believe that Mr. Schnatter has any interest in selling his stake or willingly stepping away from the company,” said Peter Saleh, an analyst with BTIG equity research, in a report Friday.

Saleh called the Reuters report a “recycled headline” and remained neutral on the long-term effect on Papa John’s shares.

“Despite a 20 percent decline in operating cash flow in 2018 given sales declines, we believe the company is generating enough free cash to sustain itself without an outside equity investment at this time,” Saleh said.

John Gordon, principal at Pacific Management Consulting Group, said that if the company was going to sell itself, a deal would have had to come through before the December 2018 holidays. He said Papa John’s management and Schnatter were at an impasse.

“I don’t think Papa John’s has hit rock bottom yet,” Gordon said. “If we get another bad quarter or two and the stock really begins to tank more so than it has, then that could raise the stakes in terms of actually getting something done.”

For the most recent quarter ended Sept. 30, Papa John’s same-store sales were down 9.8 percent in North America and down 3.3 percent at international stores.

Papa’s John’s is the nation’s third largest pizza delivery company with 5,247 locations worldwide as of September.