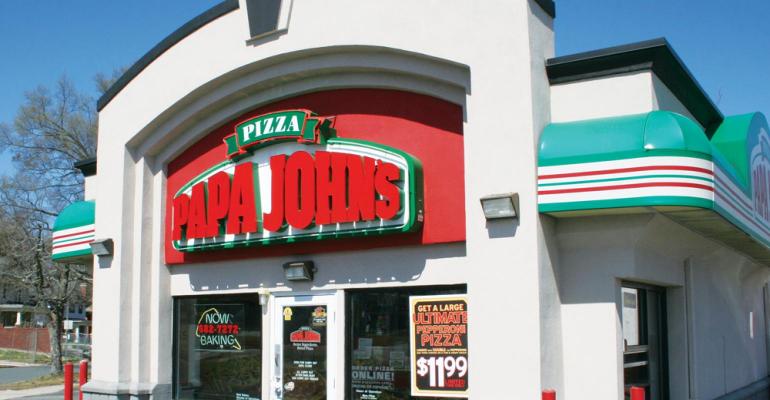 Papa John's posts largest same-store sales growth in a single month ever for April amid the coronavirus pandemic.
News>Quick Service

Papa John’s first quarter performance streak continues into the second quarter with 26.9% same-store sales growth for the North American market in April, the strongest month in the company’s history in terms of sales and average unit volume, according to Wednesday morning’s Q1 earnings call. International markets continue to struggle with 1.4% same-store sales growth for the month of April. As previously reported, for the first quarter ended March 29, same-store sales increased 5.3% for North America and 2.3% for international markets.

As the coronavirus crisis began to hit the restaurant industry hard in mid-March, Papa John’s saw a negative impact on sales, from what they’re calling “pantry-hoarding.” But after the first few weeks of the crisis began to settle down, they began to realize the strength of the pizza delivery business during the COVID-19-related lockdowns as sales numbers grew significantly.

“I think what this challenging, unprecedented situation has shown is that the pizza delivery business is the kind of business that can persevere through these types of challenges,” Papa John’s CEO Rob Lynch said during Wednesday morning’s earnings call. “Our business models are set up for this, and as that behavior continues to evolve, we will benefit from that. I think the dine-in side of the pizza [industry] is facing the same challenges as the rest of the casual dining industry. If there is a shakeout, I would see it on the side of restaurants that focus on dine-in as opposed to both national and mom and pop pizza delivery.”

Lynch also attributed much of the success of the first quarter and preliminary April results to menu innovation, including the addition of the Papadia fold-over sandwich and the jalapeño poppers. During the call, Lynch said that the Papadia — which is their first menu innovation that is not a pizza, side dish or dessert — is allowing for incremental ticket growth as customers are adding Papadias on top of their regular pizza order instead of just ordering the new menu item separately as a snack.

Papa John’s growth in Q1 and the beginning of Q2 is also related to their customer base widening. Coming off nearly two years of struggles related to controversies from founder and former CEO John Schnatter, the company is seeing both new and lapsed customers turn to them during the coronavirus crisis.

“The majority of the growth we’ve seen is from new customers,” Lynch said during the call. “We’ve seen over one million new customers in April and we have not seen that in a long time. In fact, we lost a lot of customers in 2017 and 2018 and now we’re winning them back. […] This adversity has helped our team accelerate cultural development.”

As a result of the improved customer base, Lynch hinted that their operations strategy is evolving. For example, for much of 2019 as the company continued to struggle, Papa John’s turned to discounting to improve sales and return rates, but now, as the loyalty program grows to 16 million customers, they will be shifting focus.

“We’re focused on menu innovation and our brand delivering better quality instead of commoditizing the category and chasing the discounts which hurt our unit economics,” Lynch said, adding that while they have new products coming down the pipeline that they have been put on pause to support operations during this challenging time for the industry.