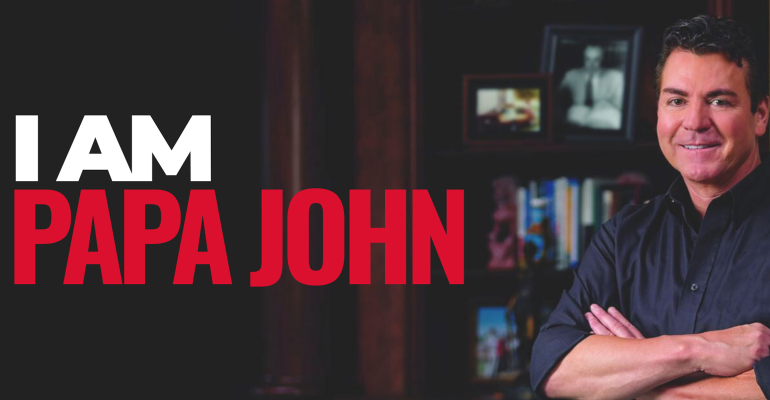 Borrowing a page from the activist-investor playbook, former Papa John’s International Inc. CEO and chairman John Schnatter is promoting a new website to communicate directly with company employees and shareholders.

Schnatter resigned as chairman of the Louisville, Ky.-based pizza company in July after reports of his use of a racial slur, but he later called that resignation “a mistake.” He set up the SavePapaJohns website and promoted it Wednesday in a full-page ad in the hometown Louisville Courier Journal.

Previously, the Papa John’s founder, who still owns about 30 percent of the publicly traded company’s shares, resigned as CEO after he sparked controversy during a Papa John’s Nov. 1 conference when he blamed the chain’s decline in sales on the National Football League not quelling players’ on-field protests.

Schnatter, however, said earlier this month he is “not going away,” and the new website bolsters that claim.

“The board wants to silence me,” he says on the website. “So this is my website, and my way to talk to you.”

Activist investors have included such websites in their strategies when developing previous attacks on restaurant companies.

Another website was integral to the pitched battle in September 2014 by activist shareholder Starboard Value L.P. in its campaign to replace the entire 12-member board of Orlando, Fla.-based Darden Restaurants Inc. Starboard’s campaign against the parent to the Olive Garden and LongHorn Steakhouse brands included a “ShareholdersForDarden” website, also no longer active, that published its 294-page report on “Transforming Darden Restaurants.” That proxy fight was successful.

“I built Papa John’s from the ground up and remain its largest shareholder,” Schnatter says on the site. “I love my company, its employees, franchisees and customers.”

The founder goes on to say: “I miss you all very much.  More than words can express!  Papa John’s is our life’s work and we will all get through this together somehow, some way.  I can only imagine how difficult this entire situation is on you, and I’m very sorry you all have to go through this.  Know that in every minute of every day you are all in my thoughts and prayers.”

The company issued a statement in response to Schnatter’s ad and new website:

"We are not, nor should we be, dependent on one person. Papa John's is 120,000 corporate and franchisee team members around the world,” the company said in a statement.

“Stakeholders, including customers, franchisees, employees and investors, have expressed strong support for the actions we have taken to separate our brand from Mr. Schnatter,” the company said. “No matter what John does, he will not be able to distract from the inappropriate comments he made.”

The company said it is taking “the right steps to move the company forward." On July 27, the company named board member Olivia Kirtley as chair to succeed Schnatter.

For the second quarter ended July 1, Papa John’s said its same-store sales were down by 6.1 percent, even more than expected, according to Papa John’s chief financial officer Joseph Smith.

The company later said it would cut royalties and other franchise fees in the United States and Canada in the wake of the flagging sales.