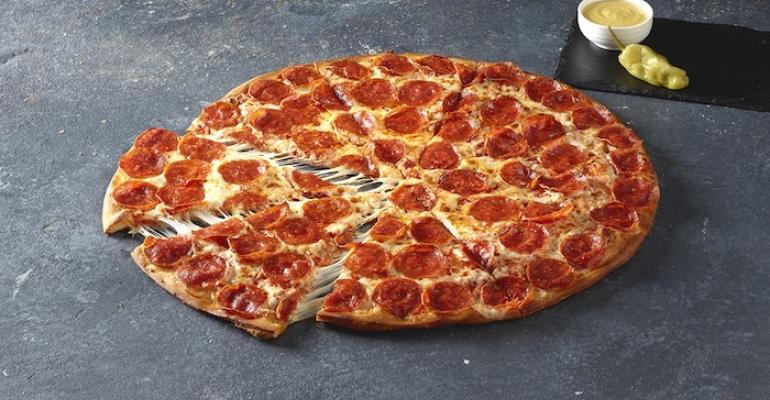 Papa John’s International Inc. leaned into product innovation amid the pandemic of 2020 and found it increased sales and loyalty, executives said Thursday.

Louisville, Ky.-based Papa John’s, which reported same-store sales were up 13.5% in North American restaurants and 21.4% at international units in the fourth quarter, said it passed $1 million in annual average unit volume in 2020.  Just 18 months ago, AUVs were $850,000, he said.

A vertical supply chain and investments in new kitchen equipment helped Papa John’s ease the rollout of Papadia flatbread quesadillas in January, the Shaq-a-Roni (named for board member and restaurant owner Shaquille O’Neal) pizza is June and stuffed crust pizza in December, said Rob Lynch, the company’s CEO, in a fourth-quarter earnings call.

“In 2021, we're focused on maximizing the impact of a number of productivity initiatives that we launched last year, including deploying dough spinners, enhancing the make line and retrofitting our cut stations,” Lynch said.

Lynch said the brand would also rollout initiatives to increase productivity of team members, including “Papa Call,” the brand’s centralized order-taking and customer-service center. That will allow store-level employees “to focus on making great pizza, not answering the phone,” he said. “This results in incremental transactions and labor savings, not to mention better customer experiences.”

New product innovations rely not only on operational improvements but also on the supply chain, Lynch added.

“Our vertically integrated supply chain is a huge asset for us,” he said. “And our strategy that makes sure that the innovation doesn't negatively impact the supply chain allows us to be very flexible, on the timing and the cadence of our promotions.” He said Papa John’s expects to have four or five promotions and limited-time offers each year.

The supply-chain flexibility allows Papa John’s to extend popular LTOs, like the stuffed crust pizza, if they are boosting sales, he said. “It's been a huge success,” he said, “We're going to continue to promote this, probably a little longer than maybe we would have promoted something that wasn't quite as successful.”

The Epic Stuffed Crust pizza and Shaq-a-Roni were promoted at $12, higher than the Papa John’s average piece of price point of $10.50.

“Stuffed crust was probably the most challenging innovation this brand has ever launched,” Lynch said. “We worked on that product for a year, and it wasn't just us as a company. It was us working hand-in-hand collaboratively with our franchisees. We have been testing this and developing the process to launch stuffed crust with our franchisees really over the course of 2020. And that's why when we launched it, we were ready to launch it.”

Lynch said Papa John’s would be continuing its strategic partnerships with national delivery aggregators, a differentiator among pizza chains, because it allows the brand to scale delivery to more customers during peak times. About 75% of Papa John’s sales are through delivery, he said.

“This has the dual benefit of generating incremental profitable sales and improving staffing utilization,” he said, adding that sales through aggregators increase four-fold in 2020. “We expect these partnerships to be a key part of our long-term growth plan,” Lynch added.

Ann Gugino, Papa John’s chief financial officer, added that “food, labor and mileage costs were also at the lowest level ever as a percent of sales in spite of increased spending related to enhanced hygiene.”

The company said it is on track to open its Atlanta satellite office by summer.

“Affected employees who do not relocate to Atlanta have been offered a separation package,” the company said Thursday. Papa John’s expects one-time corporate reorganization costs of $15 million to $20 million related to employee severance and other costs, with about $6 million of those incurred in the fourth quarter.

Correction Feb. 25, 2020: This story has been edited to correct the spelling of Ann Gugino, Papa John's chief financial officer.