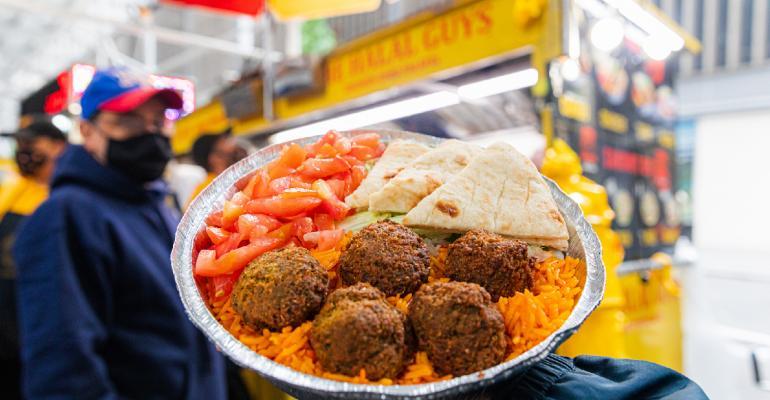 After passing the 100th store mark in early 2022, The Halal Guys set a new goal to grow to 400 worldwide locations.
News>Quick Service

2022 saw The Halal Guys reach a milestone of 100 locations, but the brand isn’t taking its foot off the gas pedal with 13 new locations slated to open before year’s end as it continues to grow towards its new goal of 400 worldwide outlets.

During its eight years franchising through Fransmart, The Halal Guys have made Halal food as mainstream in America as sushi, tacos and burgers. The iconic halal restaurant continues its growth as new and existing franchisees are slated to open 12 new locations throughout the United States in Q4.

“It’s always rewarding when our existing franchisees are enjoying so much success that they decide to expand their locations,” said Ahmed Abouelenein, CEO of The Halal Guys. “We’re also excited to welcome our new franchisees and the opportunity to bring The Halal Guys unique spin on Halal food to new parts of America.”

After passing the 100th store mark in early 2022, The Halal Guys set a new goal to grow to 400 worldwide locations. The brand plans to achieve its new milestone as existing franchisees add locations and with new multi-unit operators worldwide.

“Nothing speaks to the quality of a brand like happy franchisees that continue to invest in it,” said Dan Rowe, CEO of Fransmart. “The Halal Guys support of its franchisees, strong supply chain and revenue make it attractive for franchisees from Dallas to Dubai.”

The new stores opened or opening in Q4 are located in:

The Halal Guys started with one cart in midtown Manhattan before Fransmart, the leading franchise development company for emerging brands, took the brand to international success. Today, The Halal Guys has over 100 restaurants worldwide.

The brand is actively seeking new franchisees in the U.S., UAE/GCC and Singapore. For more information on franchising visit: https://fransmart.com/the-halal-guys/

About The Halal Guys

The Halal Guys grew from humble beginnings as a food cart on the streets of New York City to a global icon known as the original and largest American halal street food concept in the world. The food cart was first parked on the corner of 53rd and 6th Avenue in 1990 by three like-minded men from Egypt who came to America in search of a better life. When the founders noticed many Muslim cab drivers in New York City were looking for a place to buy halal food in Manhattan, they created their first food cart that quickly grew into a leading destination for American Halal fare. In 2014, The Halal Guys began expanding its authentic halal cuisine from the food cart into restaurants and now operates 101 stores within the United States, Canada, Indonesia, South Korea and the United Kingdom. For more information, visit www.thehalalguys.com.

As the leading franchise development firm in the country, Fransmart turns emerging restaurant concepts into successful national and global brands. Founded by Dan Rowe, the man who identified and grew brands such as Five Guys Burgers & Fries and QDOBA Mexican Grill from single unit businesses to the powerhouse chains they are today. Fransmart’s current and past franchise development portfolio brands have opened more than 5,000 restaurants worldwide and facilitated franchise investments that have cumulatively generated 1 billion dollars in revenue to date. Follow Fransmart on Facebook, LinkedIn, Instagram, Twitter and YouTube. For more information, visit www.fransmart.com.