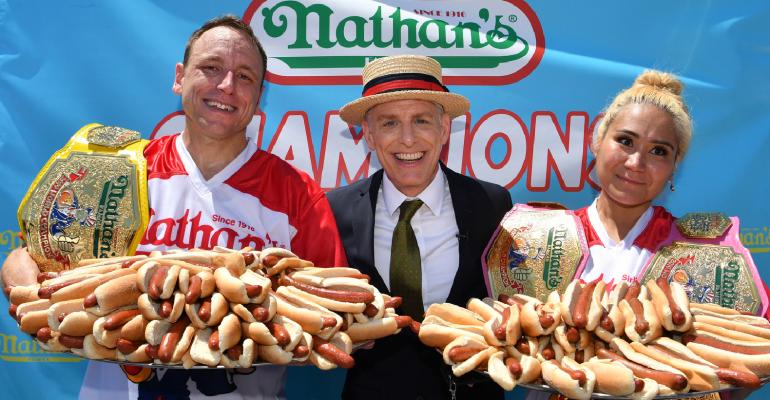 While coronavirus may limit the size and scope of the Nathan’s Famous Fourth of July International Hot Dog Eating Contest, the brand is forging ahead Saturday with a social-distanced competition indoors — but it is doing so with relish.

“You won’t have 40,000 raving fans watching from the corner of [Coney Island’s] Surf and Stillwell this year, but there are several things that make this in many ways the most exciting contest we’ve ever held,” said James Walker, senior vice president for Jericho, N.Y.-based Nathan’s Famous Inc.

As usual, the hot dog eating contest will be televised on cable’s ESPN at noon EDT but the tens of thousands of fans will be missing because of the COVID-19 pandemic.

“We’re holding it in an enclosed location in the Coney Island area,” Walker said in an interview. “And we have not only put in place for the eaters and judges everything from Plexiglass dividers and ensuring social-distancing criteria but also put in place safe pathways from green rooms to staging areas.”

For safety, the number of competitive eaters has also been reduced from 15 men and 15 women to five of each. Limits have been also put on how many production personnel will be involved, Walker said, and the event will not be open to the public.

“It’s very much about how to execute this contest at the highest degree of safety,” he added.

A silver lining for Nathan’s Famous this year is that the annual Wimbledon tennis competition has been canceled. ESPN, which has televised the contest live since 2004, has typically had more than a million views of the Coney Island event.

“Normally, this contest runs up against a very famous tennis match in England,” Walker said coyly. “This year will probably not only be the most watched of our contest, but the viewership will be incredible because there’s no competition for sporting activities. We’re expecting a huge viewership.”

“There’s a big difference between that Fourth of July Coney Island sun beating down on you as a contest and eating in an enclosed space with air-conditioning and climate control,” he said. The five contestants will also be six feet apart. The men’s record is 74 hot dogs and buns.

“Joey has said he intended to eat 77 hot dogs,” Walker said. “I’m excited to see what our current reigning champions can do.

The modern-day contest was first recorded in 1972, and it has been sponsored every Independence Day since.

Walker said the company was proud to offer the competition even during coronavirus.

“We may see some world records,” Walker said. “There has been so much bad news — especially for the restaurant industry — almost daily. While Nathan’s is a well-known brand from a grocery store standpoint … we started as a restaurant company and that still is in our brand DNA.”

The company has 300 locations as well as the grocery retail line, but this year it is offering for the first time through Goldbelly a $209 meal kit so fans can do an eat-along to the televised competition. Orders must be placed by July 2 for July 3 delivery.

“What better way to enjoy the 4th than with Nathan’s World Famous Hot Dogs in the comfort of your own yard?,” Goldbelly asks. “Why 74 hot dogs you ask? Joey “Jaws” Chestnut took down 74 of Nathan’s Famous Hot Dogs last year to hold his title! Are you game?”

While this year’s Nathan’s contest will be reduced in scale, Walker said remains excited and will be doing double duty because of limit on the size of production staff.

“I will be James Walker, Hot Dog Technician,” he said. “I will be actually taking part instead of standing off to the side watching.”