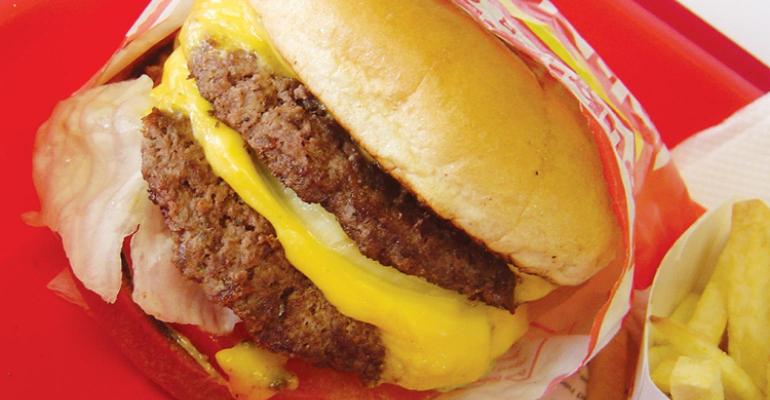 In-N-Out opens first 2 Colorado restaurants, creating a frenzy with wait times of up to 12 hours

The Colorado openings mark the chain's entrance into a seventh state; the two restaurants opened Friday in the greater Denver area and Colorado Springs; local police clock wait times at 12 hours by mid-afternoon.

In-N-Out Burger opened its first two restaurants in Colorado on Friday, creating a frenzy with fans waiting anywhere from nine to 12 hours to get their hands on the brand's famous Double Double, according to the chain and local police.

The 72-year-old year old Southern California burger institution entered its seventh state with the debut of two stores in Colorado Springs and Aurora, Colo. The latter location is in the greater Denver area.

According to a Friday afternoon tweet by the Aurora Police Department, the wait was about 12 hours.

"Traffic is still significantly impacted in the area surrounding the mall," the tweet states. "They will close before you get to the window most likely. Meanwhile, many other local eateries do not have a wait, hint hint." 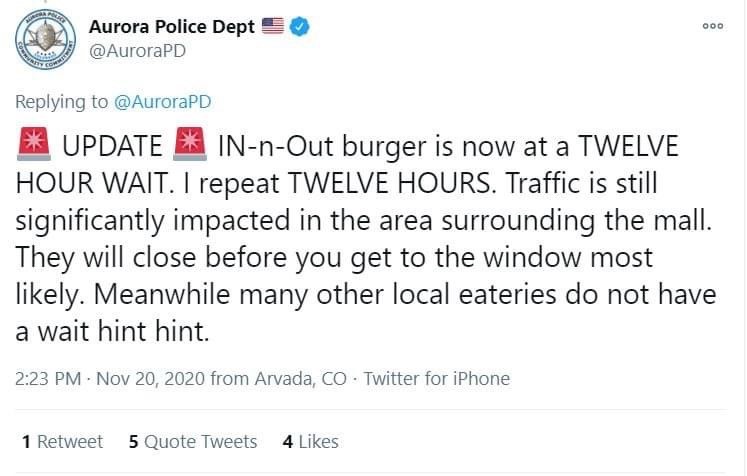 According to a In-N-Out customer service representative, the wait at both locations is averaging about three and half hours for carryout and nine hours at the drive thru.

The restaurants are only open for off-premise orders. A third restaurant is expected to open before the end of the year at 9171 W. Westview Road, Lone Tree, Colo.

Each restaurant employs about 80 people. The company says the starting wage is $14.50 per hour, which is well above the state's $12 an hour minimum wage.

Both restaurants will have one drive-thru lane, with seating for 74 guests, although indoor dining is currently unavailable, the company said in a statement.

The Irvine-based quick service chain, founded by Harry and Esther Snyder in 1948, first announced plans to enter Colorado three years ago. The company has since built a beef-patty production facility and distribution center in Colorado Springs to support a string of at least 50 restaurants located within 350 miles of the facility.

With these openings, the chain has nearly 360 restaurants in seven states.

Update: This story has been updated with more store and employee information provided by the company.