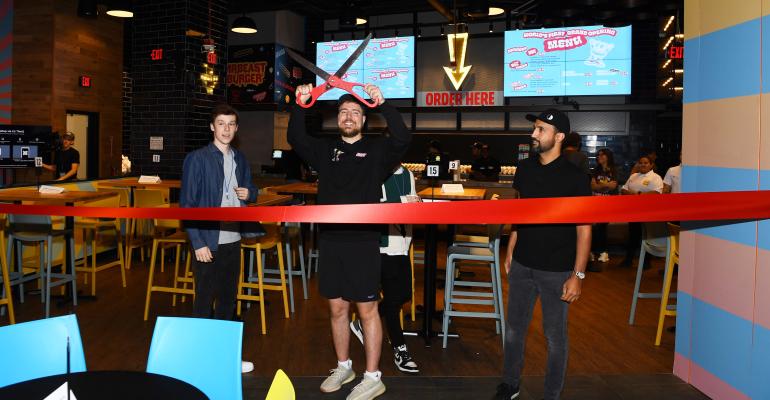 Jimmy Donaldson better known as MrBeast cutting the ribbon at the opening of the brand's first brick-and-mortar store.
News>Quick Service

Long gone are the days of restaurant brands just using social media to be sassy. Now it’s time for them to be savvy on social media, and virtual restaurant MrBeast Burger was a perfect example of capitalizing on a moment.

It launched in December 2020 in partnership with Virtual Dining Concepts, and now operates in more than 1700 locations nationwide.

“The beginning has been just wonderful,” Robert Earl, CEO of Virtual Dining Concepts told Nation’s Restaurant News,. “The guest reaction has been superb. And after having Jimmy [Donaldson, a.k.a. MrBeast] create what is considered the leading virtual brand globally, to now build a bricks-and-mortar chain is very fulfilling.”

When the brand debuted, it was met with national acclaim, one of the biggest virtual brand openings ever. Now it has a brick-and-mortar location in the American Dream mall in New Jersey. Thousands of fans gathered on Monday to watch MrBeast cut the ribbon at the first permanent location of the chain that spawned over a thousand virtual units.

“I'm getting lots of phone calls saying that this is a real shot in the arm for the mall economy,” Earl said.

Celebrities, and the internet, are becoming more involved in the food world than ever before. Consumers are going to have to get used to their favorite stars from social media jumping into the food world like MrBeast, and brands doing the opposite.

Think about the rising tide of restaurants looking to TikTok and TikTok creators for content. Just last week, Chipotle used the corn kid on TikTok, a kid who loves nothing more than corn, to create a viral ad campaign for its burrito bowls and corn salsa.

There are no plans to franchise MrBeast Burger at this time.