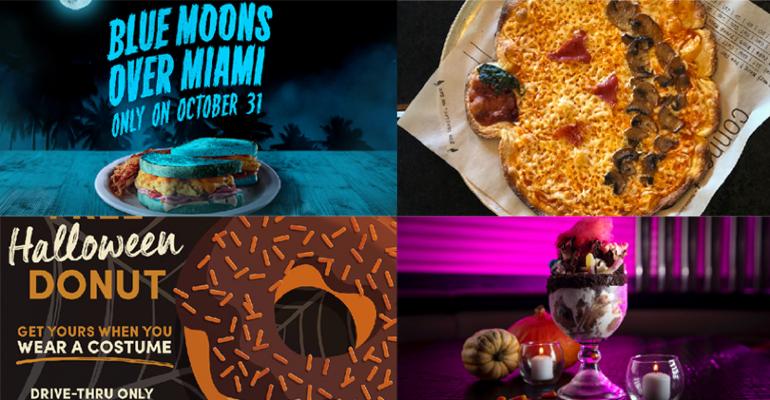 A decade ago, take-and-bake pizza chain Papa Murphy’s decided to celebrate Halloween by making a pizza with a slightly flattened side that had a dough protrusion made to look like pumpkin stem. It was decorated with pepperoni slices around the edge, and pepperoni shaped into a smiley face and nose, plus two more slices topped with olive slices for eyes, and the Jack-O-Lantern Pizza was born.

It’s joined this year by similar items from chains that clearly drew inspiration from Papa Murphy’s success, such as Fired Pie, Fresh Brothers and Papa Gino’s.

Other chains also have Halloween-themed items this year, some only available for the day itself.

Denny’s Blue Moons Over My Hammy has even more limited availability — it’s just available at 20 restaurants in Florida’s Miami-Dade area.

Dunkin’ is playing a trick on its guests with its Spicy Ghost Pepper Donut, IHOP is serving a pancake in a mummy costume and STK is serving an over-the-top, candy-filled sundae in a chalice.

Tim Horton’s is offering its Halloween Donut for free to guests who come to the drive-thru in costume on October 31.

Lazy Sundaes, a dessert concept with three units in the New York City area that specializes in boba tea and the Korean dessert bingsoo, made with shaved, frozen milk, is serving a Swamp Water Bingsoo for the holiday, inspired by the  home of the movie character Shrek.

Click through to learn more about these holiday-themed LTOs.