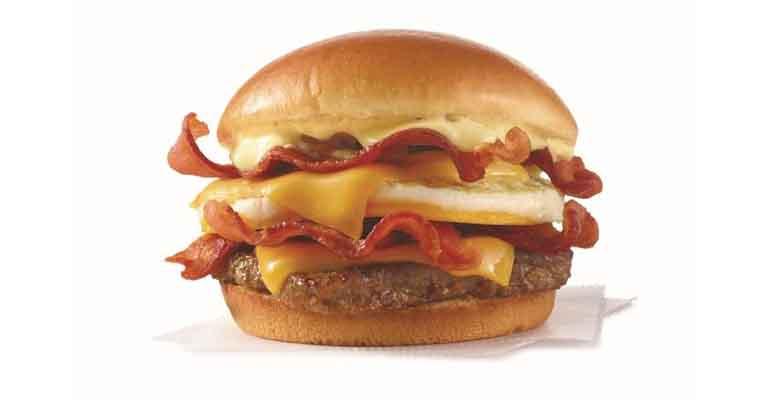 Wendy's breakfast menu will include about 18 items, including a breakfast baconator.
News>Quick Service

As it prepares for the national launch of breakfast, Wendy’s has been poking the bear of its biggest rival, McDonald’s Corp.

Now the bear is roaring back, or at least its cubs are.

Related: McDonald’s CEO Chris Kempczinski: ‘We have to win at breakfast’

“Make no mistake, the Breakfast Wars are on,” the board of the National Owners Association, a group of McDonald's operators, told members in an email distributed Sunday.

Led by chair and McDonald’s franchisee Blake Casper, NOA responded to the social media breakfast blitz launched by Wendy’s. In various posts, the Dublin, Ohio-based burger rival has taken aim at McDonald’s, stating their breakfast will be something worth waking up for.

“People deserve a delicious, affordable and higher quality breakfast than what they're currently getting,” Wendy’s has stated.

In a video, chef Haracz, who has 34,000 Twitter followers, tried the Breakfast Baconator. The sandwich, expected to be the centepiece of the 18-item breakfast menu, is made with grilled sausage, American cheese, applewood smoked bacon, eggs and Swiss cheese sauce.

Despite showing doubts, Haracz appeared to love the egg sandwich, reacting with expletives. ““Holy s***, this is great.”

NOA, in their email, downplayed the Twitter antics, stating they have very little “shelf life.”

“They have a new guy in charge of their Twitter handle and he is having a ball with it,” the email states. “It reminds me of my fourteen year old with her Snapchat account. Everything is very important, the same fifty followers comment, and each message has a 24 hour shelf life.”

Still, NOA said adding breakfast makes sense for the brand but could prove difficult for operators. (Note: The first McDonald’s operator to experiment with breakfast did so in 1970. Wendy's tested breakfast in Southern California 13 years ago, but pulled the plug on a nationwide launch in 2009.)

“The long story is Wendy’s has barely grown sales over the years, so breakfast is a no brainer, especially if you are in Dublin, Ohio. It’s a little harder for those running the restaurants,” the email states. “Adding 300 more hours to your weekly schedule isn’t something to do lightly, no matter how good the tweets are.”

Still, the board encouraged fast food eaters to shop around at all brands and teased to a possible new breakfast burger coming to the menu: Morning Mac.

“America knows their McDonald’s favorites but it’s time to shop around. Time to see what’s out there. Are there still French Toast sticks at Burger King? Does Taco Bell still serve Breakfast?” NOA asks.

“How is the meatless sausage at Dunkin? Does the Baconator live up to the tweets? And what about the McDonald’s Breakfast line up?” reads the email. “What’s this business about a secret Morning Mac?”

When asked about the Morning Mac, representatives for McDonald’s did not immediately respond Monday.

The Chicago-based chain might not be engaging in a head-to-head social media battle with Wendy’s, but they are preparing to fight.

In his first earnings call as CEO, Chris Kempczinski said improving guest counts in the U.S. starts with breakfast.

“Breakfast is the only daypart in the industry that's seeing traffic growth. We have to win at breakfast,” he said.

He said McDonald’s will focus on breakfast in 2020. The brand also recently announced plans to expand its Chicken McGriddles and McChicken Biscuit breakfast sandwiches systemwide.

Wendy’s breakfast, which has been in test at 300 stores, launches systemwide March 2. The menu contains about 18 items including croissant and biscuit sandwiches made with fried chicken, bacon, eggs and sausage, as well as iced coffee beverages. The company has previously stated that breakfast will contribute eventually to a 10% growth in sales.

Wendy's has more than 6,700 restaurants worldwide. McDonald’s, which has about 21 items on its regular breakfast menu, has nearly 13,900 restaurants in the U.S.

NOA formed in 2018 to represent the franchise interests with McDonald's Corp. At the time, the organization represented more than 400 U.S.-based McDonald’s operators. It has since built a membership that includes more 1,000 franchisees, many of whom own multiple restaurants. The group has been vocal about a wide range of issues from Experience of the Future requirements to menu missteps including the lack of a premium chicken sandwich on the national menu.

Update: This story was edited to include more information about NOA.