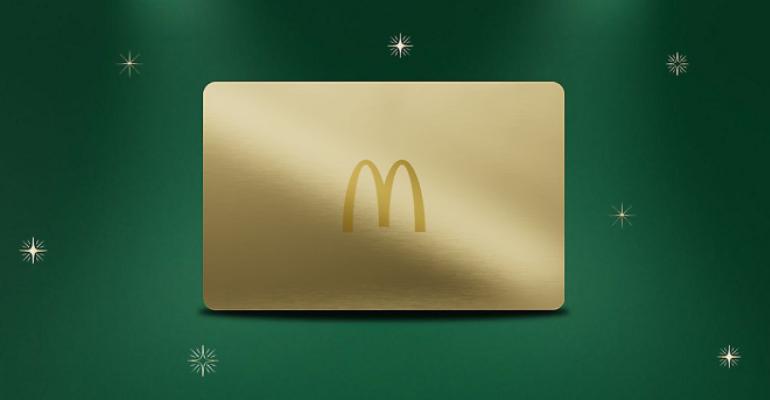 Photo courtesy of McDonald's
Customers who engage with the MyMcDonald's app have the chance to win the chain's elusive McGold Card.
News>Quick Service

McDonald's is offering the chance to win its VIP McGold Card

Customers will have the chance to win the elusive McGold Card by ordering through the McDonald's app every day through the holiday promotional window.

We now know what “the person who runs the McDonald’s account” has been teasing fans about via text messages.

For the uninitiated, the McDonald’s Gold Card has been a bit of a pop culture mystery since 2015 when actor Rob Lowe showed his off during Jimmy Kimmel Live. According to Business Insider, Lowe’s Gold Card was issued by a franchisee friend, not the company itself. The card, which grants access to free McDonald’s food, has been handed out by franchisees to those they consider local heroes, BI reports, yet well-knowns like Warren Buffett and Bill Gates also possess the cards. In 2020, McDonald’s UK planned to launch a VIP Gold Card as part of its annual Monopoly promotion but put the promotion on hold when the pandemic hit. The UK system brought the McDonald’s Gold Card back, however, in 2021, offering fans the chance to win one of just 10 cards available, also through the MyMcDonald’s app. Now, the U.S. system is getting involved.

“Our fans have been fascinated by the lore of the McDonald’s Card and if it really exists. And now, we’ll make this McDonald’s legend a reality for our fans by giving them the ultimate holiday gift – a chance to win a card and then share access to it with three of their family or friends,” Tariq Hassan, McDonald’s USA chief marketing and customer experience officer, said in a statement. “Just by using the McDonald’s App, everyone can experience the joy that comes with sharing McDonald’s this holiday season.”

McDonald’s is honing in on its app for a reason. During the company’s Q3 earnings call in late October, CEO Chris Kempczinski said a record mix of transactions are now coming through the channel. The chain’s MyMcDonald’s loyalty program was launched just last year and already includes over 25 million U.S. members. Loyalty members tend to visit more frequently and spend more money when they do visit and, accordingly, McDonald’s is shifting its marketing approach to be more personalized via digital channels.

So far, that approach seems to be paying off. The company has generated positive same-store sales throughout the past several quarters and is also one of the few chains generating positive traffic counts despite higher menu prices. According to new Placer.ai data emailed to Nation’s Restaurant News, McDonald’s traffic has been positive year-over-year every week since the beginning of July. Following the Wakanda Forever Happy Meal launch in early November, McDonald’s traffic was up by 4.9% the week of Nov. 7 and 3.3% the week of Nov. 14.