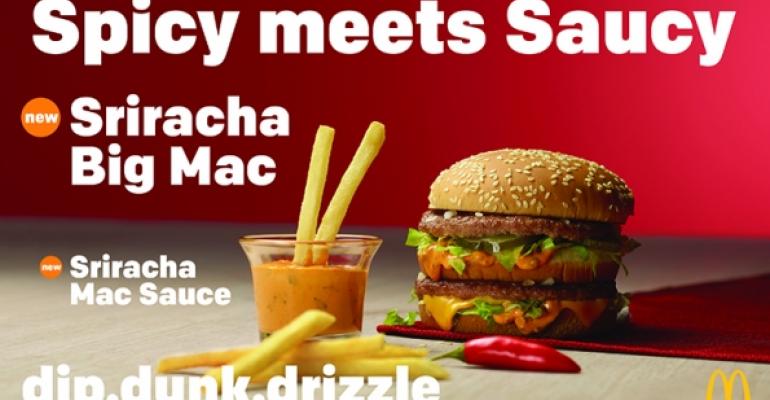 McDonald’s Corp. has started testing a Sriracha Big Mac at locations in Columbus, Ohio, making it the chain’s first attempt at a changed recipe of its iconic, signature sandwich.

The Sriracha Big Mac, which featured Big Mac sauce flavored with spicy Sriracha, will be tested at 128 locations in Central Ohio through the end of the year, the same locations that tested different size Big Macs earlier this year.

McDonald’s introduced a Sriracha-spiked version of its signature Special Sauce this summer at locations in Seattle and southern California.

“Offering the addition of Sriracha to our Big Mac Special Sauce was a fun way for our culinary innovations team to think outside the box and continue to answer the call of our customers who are always looking for the next great innovation in food experience and taste,” Scott Nickell, Central Ohio Co-op president, said in a statement.

The Ohio test will be used to decide whether to introduce the spicier version of the Big Mac nationwide.

In addition to the Sriracha Big Mac, McDonald’s in the Columbus area will offer the Sriracha Big Mac sauce a la carte as a dipping sauce for its Chicken McNuggets and French Fries. Customers will be able to customize any item on the menu with the sriracha through the end of the year.

The test is the latest indication that McDonald’s is thinking differently in its efforts to bring customers lost in recent years to competitors in the growing burger category. McDonald’s primary quick-service restaurant competitors have been joined by a large generation of fast-casual burger chains like Five Guys, Smashburger and Shake Shack Inc.

Same-store sales in the third quarter ended Sept. 30 increased 1.3 percent, a slowdown from earlier in the year when the chain generated sales with its All-Day Breakfast promotion.

Yet traffic remains weak, and the company is concerned that many younger consumers aren’t allured to its premium burgers, given the competition. Only one in five have tried the Big Mac, according to an internal memo cited recently by the Wall Street Journal.

By offering a spicier version of the Big Mac, McDonald’s hopes to get some of those younger customers to give it a shot.

Numerous chains, notably McDonald’s rival Burger King, have offered different versions of their own iconic sandwiches for years. McDonald’s has frequently done so with its Quarter Pounder line, but this is the first time the chain has tried a different recipe with the Big Mac, which a franchisee created back in 1967.

“We’re always trying new creations and we wanted to innovate with an on-trend flavor like Sriracha to give our customers in Columbus a new and exciting taste,” Mike Haracz, McDonald’s chef, said in a statement.

Update Nov. 14, 2016: This article has been updated with information that McDonald’s introduced Sriracha-flavored Special Sauce earlier this year at restaurants in southern California and Seattle.