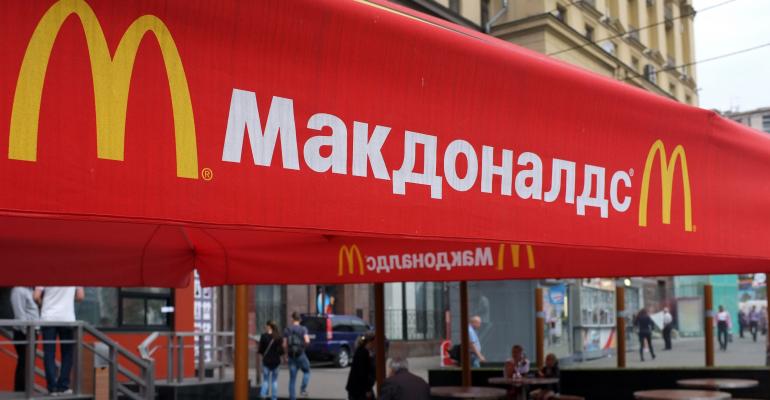 McDonald’s temporarily to close units in Russia over Ukraine attack

McDonald’s Corp. said it will close restaurants and halt operations temporarily in Russia in response to that country’s invasion of Ukraine, the burger giant said Tuesday.

McDonald’s CEO Chris Kempczinski, in an email to McDonald’s employees and franchisees, said, “The conflict in Ukraine and the humanitarian crisis in Europe has caused unspeakable suffering to innocent people. As a system, we join the world in condemning aggression and violence and praying for peace.” Some other U.S.-based foodservice such as Yum Brands Inc. and Starbucks Corp. also took steps in their Russia business.

Chicago-based McDonald’s has more than 850 restaurants in Russia and more than 40,000 worldwide.

Louisville, Ky.-based Yum Brands Inc., parent to KFC, Pizza Hut, Taco Bell and other quick-service brands, said late Tuesday that it was suspending operations of KFC company-owned restaurants in Russia and finalizing an agreement to suspend all Pizza Hut restaurant operations in Russia, in partnership with its master franchisee. Earlier, Yum said had suspended investment and restaurant development in Russia.

“Like so many across the world, we are shocked and saddened by the tragic events unfolding in Ukraine,” Yum said. In Russia, Yum Brands has about 1,000 KFC units and 50 Pizza Hut locations and nearly all are under licenses or franchise agreement. Globally, Yum has more than 53,000 restaurants.

"We have decided to suspend all business activity in Russia, including shipment of all Starbucks products," said Kevin Johnson, Starbucks CEO and president, wrote in an updated letter to company employees. "Our licensed partner has agreed to immediately pause store operations and will provide support to the nearly 2,000 partners in Russia who depend on Starbucks for their livelihood." Starbucks has about 130 licensed locations in Russia and Ukraine, according to Bank of America Securities.

McDonald’s had been pressured to take a stand on the Ukraine crisis by such entities as New York’s pension fund.

Kempczinski said in his email: “Our No. 1 priority from the start of this crisis has been – and will remain – our people.” He cited a message last week from Ian Borden, McDonald’s president of international.

“As Ian Borden shared last week, the company has provided immediate financial support to our team in Ukraine. We are continuing to pay full salaries for our Ukrainian employees and have donated $5 million to our Employee Assistance Fund,” he said, “and continue to support relief efforts led by the International Red Cross in the region.”

Yum Brands said its foundation was donating $1 million to the Red Cross to support those affected by the crisis, activated the Yum! Disaster Relief Fund to support Ukrainian franchise employees and was matching donations from employees to the following charities providing relief in Ukraine: UNICEF, Red Cross, World Food Programme and International Rescue Committee.

“In addition, our franchisees in the surrounding region are providing support to refugees,” Yum said in a statement.

Toronto-based Restaurant Brands International Inc. said its Burger King division had committed $3 million to support Ukrainian refugees immediately.  RBI said it was redirecting profits from franchised operations in Russia to humanitarian efforts, starting with a donation of $1 million  to the United Nations refugee agency, the UNHCR. "In addition, Burger King franchisees in more than 25 countries in Europe are partnering with local NGOs [non-governmental organizations] to distribute $2 million of free Whopper meal vouchers to Ukrainian refugees arriving in those countries to be redeemed in the next few weeks," the company said. RBI said it had about 800 franchised Burger King restaurants in Russia and more than 29,000 restaurants in 100 countries under its Burger King, Tim Hortons, Popeyes Louisiana Kitchen and Firehouse Subs brands.

McDonald’s noted that Ronald McDonald House Charities (RMHC) Poland Care Mobile is at the Polish-Ukrainian border to provide medical care and humanitarian aid for families and children. Another Care Mobile is on the way from RMHC Latvia, the company said.

“Additionally, RMHC Ukraine is deploying medical supplies and providing humanitarian aid throughout the country, and its programs are being repurposed for use by hospital personnel,” Kempczinski said.

“The situation is extraordinarily challenging for a global brand like ours, and there are many considerations,” he said. “For 66 years, we have operated with the belief that communities are made better when there’s a McDonald’s nearby.”

The temporary closures will have impact, he noted. “We understand the impact this will have on our Russian colleagues and partners, which is why we are prepared to support all three legs of the stool in Ukraine and Russia,” he said. “This includes salary continuation for all McDonald’s employees in Russia.”

“At this juncture, it’s impossible to predict when we might be able to reopen our restaurants in Russia,” Kempczinski  noted. “We are experiencing disruptions to our supply chain along with other operational impacts. We will also closely monitor the humanitarian situation.”