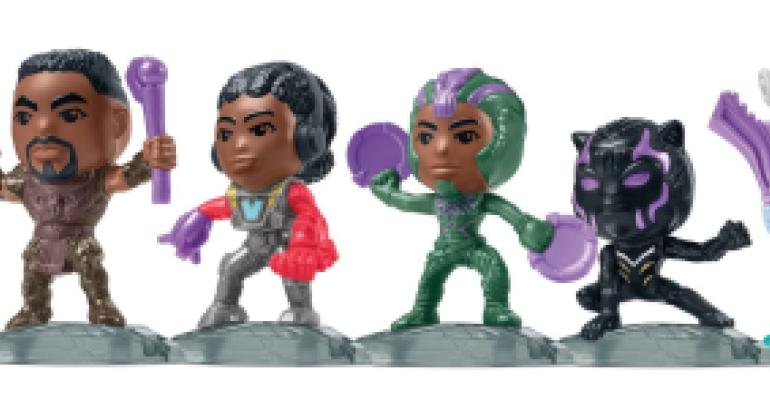 It doesn’t seem like McDonald’s is going to rest on its marketing laurels anytime soon. Fresh off a strong Q3 in which CEO Chris Kempczinski credited compelling marketing campaigns for driving growth, McDonald’s today announced a partnership with “Black Panther: Wakanda Forever.”

For the partnership, each Happy Meal now includes one of 10 “Black Panther: Wakanda Forever” super hero toys based on characters from the movie, including Shuri and Okoye, and newcomers Namor and Ironheart. The Happy Meals will be available for a limited time while supplies last.

The much-anticipated, Marvel Studios/Disney film will be released Nov. 11 starring Angela Bassett, Letitia Wright, Winston Duke and Danai Gurira. Projections estimate the movie could bring in at least $175 million during opening weekend as it builds on the original “Black Panther” film from 2018, which debuted to $202 million in the U.S.

"The first Black Panther movie inspired a new generation of Marvel lovers – and that's because of the powerful story it told, brought to life by an incredibly talented cast," Jennifer Healan, McDonald’s VP of U.S. marketing, brand content and engagement, said in a statement. "It set a whole new standard for representation on the big screen. And now, we're excited to bring that experience to our restaurants and help fans see and celebrate their inner hero with this new Happy Meal – because seeing is believing."

“Black Panther” was the first Marvel film to feature a predominantly Black cast. It won three Academy Awards and shattered box office records, earning more than $1.34 billion at the box office worldwide. Such numbers could translate into another traffic influx for McDonald’s, which experienced material spikes and digital records after the launch of its Cactus Plant Flea Market adult Happy Meal promotion in early October.

Traffic at the chain has been up steadily all year, which has helped generate more market share. This was one of the main objectives for McDonald’s when it initially announced its “marketing war chest” in 2020. Since, the chain has featured successful campaigns from the Travis Scott Famous Order to the Camp McDonald’s experience.