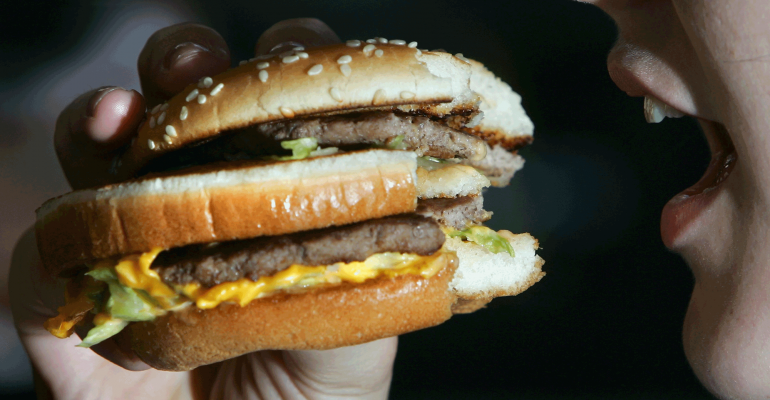 McDonald’s Q1 boost thanks to Big Macs and breakfast

McDonald’s Corp.‘s strategies took hold in the first quarter, and the company’s executives believe other efforts coming in the coming years could keep customers coming back for years.

The Oak Brook, Ill.-based burger giant on Tuesday said its U.S. same-store sales increased 1.7 percent in the quarter ended March 31 — a surprisingly strong result given difficult comparisons in the period.

McDonald’s stock rose 5 percent in morning trading as a result, hitting another in a series of all-time highs for the venerable quick-service chain.

Investors and analysts had expected a modest decline, given that the company reported a decline in the fourth quarter, and was lapping a tough, 5.4-percent increase in the first quarter a year ago.

McDonald’s said that traffic in the quarter fell in the U.S., but that it “began to strengthen” in the period. Yet executives said traffic was flat when they factor out the extra day in the first quarter of 2016, thanks to Leap Day.

Traffic is an important consideration for a chain that estimates it lost 500 million transactions in its important home market since 2012. The company’s same-store sales performance in the first quarter “reflect the emphasis we’re placing on growing guest counts, which continues to be a high priority,” Ozan said.

McDonald’s generated positive momentum in the quarter thanks to a couple of new promotions, and one older one. All-day breakfast, widely credited with generating more enthusiasm at the chain starting in the fall of 2015, continued to generate sales.

In addition, customers ordered the new sizes of Big Mac the company introduced in the quarter, including its third-pound Grand Mac and its smaller size Mac Jr. And executives said that the company’s $1 drinks promotion, notably its $1 coffee promotion, generated more traffic. Executives also said expressed confidence in a trio of strategies it has coming into more restaurants across the country this year — which CEO Steve Easterbrook called, “velocity accelerators.”

Those accelerators are the company’s digital efforts, including mobile order and payment, delivery, and its kiosk-based Experience of the Future. Those strategies “will drive incremental, profitable growth,” Easterbrook said.

McDonald’s has been testing delivery in Florida markets, and is now planning to take delivery to additional cities this quarter. The company would not specify which markets are getting delivery.

“We are not in test mode,” Easterbrook said. “We are expanding.”

The biggest domestic strategy is Experience of the Future, which uses kiosks and table service inside of its restaurants. Kiosks have been common in other markets, notably Europe, and McDonald’s wants them in 2,500 locations by the end of the year, and in most of its 14,000 domestic locations by 2020. Mobile ordering, meanwhile, is being tested in more than 400 locations across the country, including Chicago, Monterrey, Salinas, Spokane and Washington D.C., executives said.

Mobile ordering is being expanded nationwide by the end of the year. That effort will include curbside service.

Easterbrook said these efforts should drive sales not just in the short term, but also the long term, as consumers adapt to the changes.

“If we have a new menu item launch, or all-day breakfast, we end up with a good surge initially in the first handful of weeks, then it settles down to a steady run rate,” Easterbrook said. “With the three accelerators … they start well, but we have year upon year upon year of growth.”

He noted that the company’s kiosks generate initial excitement as consumers opt for the touch screens, rather than ordering at the counter. Over time, however, the kiosks work alongside mobile order and pay, and customers find it easier to order that way. And that drives more usage.

Executives did note on the call that the company will start offering its Signature Crafted line of somewhat customizable burgers and chicken sandwiches in the U.S. next week.

But they also stressed that the company won’t rely on a lot of new products like they have in the past to generate traffic. “We will have menu innovation, but it won’t be reckless,” Easterbrook said. “We can’t have too many items, too often.”

The company is planning to start serving Quarter Pounder burgers made with fresh beef in the U.S. by the middle of next year. Easterbrook said the company “found ways to get around operational complications” associated with the move.