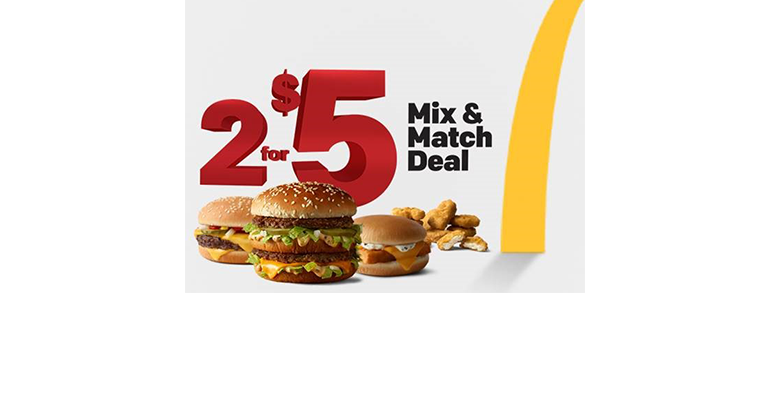 McDonald’s is closing out 2018 with two strong value plays.

As the value wars rage on in the quick-service segment, the Chicago-based chain said it is bringing back the 2 for $5 Mix & Match Deal but with one new food choice: the Quarter Pounder with Cheese.

The company also announced plans to enhance the $1 $2 $3 Dollar Menu in a way that gives operators more flexibility to tailor the menu to meet the “tastes and preferences of local customers,” the company said.

McDonald’s did not elaborate further. The changes go into effect in January.

The current national menu, listed on the company’s website, features a cheeseburger, McChicken, Sausage Biscuit and Sausage McMuffin for $1, as well as any size soda or sweet tea beverages. The $2 items include the Bacon McDouble, a 2-piece Buttermilk Crispy Tenders, Sausage McGriddles and any small McCafe drink.

The $3 items include Triple Cheeseburger, the Classic Chicken Sandwich and the Sausage McMuffin with egg.

The move to give operators more control of the $1 $2 $3 menu comes as McDonald’s operators have united this year to raise concern about store profitability. The owner advocacy group, which goes by the name National Owners Association, has held two national meetings. The most recent one was held last week in Dallas.

Association leaders, which include veteran operator Blake Casper, have repeatedly declined to talk to the media. An email sent to Casper this morning, asking for a response to the value menu enhancements, went unanswered.

The 2 for $5 Mix & Match Deal returns Dec. 21 for a limited time. It was last seen on McDonald’s menus in August. During that time, CEO Steve Easterbrook said the company would be pushing more value offers to remain competitive.

“You can expect us to be reactive, and far more agile,” he said.

The Quarter Pounder with Cheese joins the same lineup of mix and match options:  Big Mac, Filet-O-Fish and 10-piece Chicken McNuggets. With the return of 2 for $5 deal, McDonald’s said the current $6 Classic Meal Deal will exit the menu.

“Our customers have told us value is important to them, so value continues to be key in sustaining our long-term growth,” McDonald’s chief marketing officer Morgan Flatley said in a statement. “With the $1 $2 $3 Dollar Menu and our new 2 for $5 Mix & Match Deal, we’re providing our customers a strong everyday value platform through more local market flexibility, plus rotating deals.”

Value menu tweaks have become commonplace this time of year. Last year, McDonald’s and Taco Bell made announcements to change their value menus.

Both are at it again.

The menu, which debuts Dec. 27, will feature more than 20 fan-favorite foods ranging in price from $1 to $5.