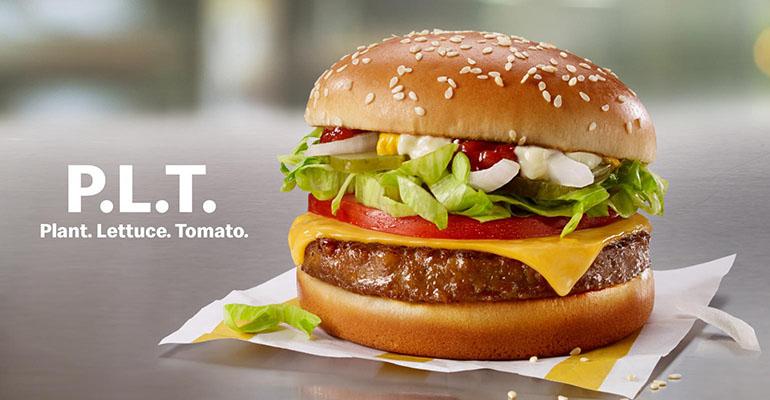 McDonald’s is nearly doubling the number of stores selling the brand’s Beyond Meat burger in Canada, signaling the chain's interest in learning more about how a plant-based burger impacts sales.

The announcement comes on the heels of Impossible Foods announcing that it will not be partnering with the world’s biggest burger chain on a plant-based burger. The CEO of Impossible Foods, which supplies about 7,300 Burger King restaurants in the U.S., told Reuters this week that “having more big customers right now doesn’t do us any good until we scale up production.”

Related: Will they, or won’t they? Domino’s, McDonald's talk plant-based strategy

Besides Burger King, Impossible Foods works with White Castle, Umami Burger and Red Robin. On Wednesday, the company backed off from that quote, telling Nation's Restaurant News that the brand has not broken talks with any large fast-food player.

"Our mission is to eliminate the need for animals in the global food chain by 2035, and that means being everywhere animal-derived meat is currently sold—including all of the world’s largest fast-food companies," the company said in a statement. "A headline in a recent wire article inaccurately implied that Impossible Foods “abandoned” one prospective customer; that’s inaccurate and would be antithetical to our mission. To state the obvious: We are happy to talk to any and every prospective customer at any time."

Beyond Meat is Impossible's biggest rival. The company's plant-based products can be found at Subway, Carl’s Jr., TGI Fridays, Del Taco and Denny’s. Larger chains such as KFC have also tested Beyond Meat products for a limited time.

McDonald’s said the 28-store test is expanding to 52 restaurants in Southwestern Ontario starting Jan. 14. The burger, dubbed the P.L.T., will be available for 12 weeks.

McDonald’s said the expansion of the global test will allow them to continue to “assess the appetite for a plant-based alternative within the McDonald’s menu.”

“The initial test of the P.L.T. allowed us to learn more about guest demand and how to integrate this new menu item into restaurant kitchen operations, while delivering the P.L.T. to our guests with the level of quality and craveability they know and love from McDonald’s,” Jeff Anderson, McDonald’s Canada chef, said in a statement.

The Chicago-based chain, which has nearly 14,000 restaurants in the U.S., has not revealed when it might bring a plant-based product to domestic restaurants.

Update: The story and headline was edited to reflect a new statement from Impossible Foods.