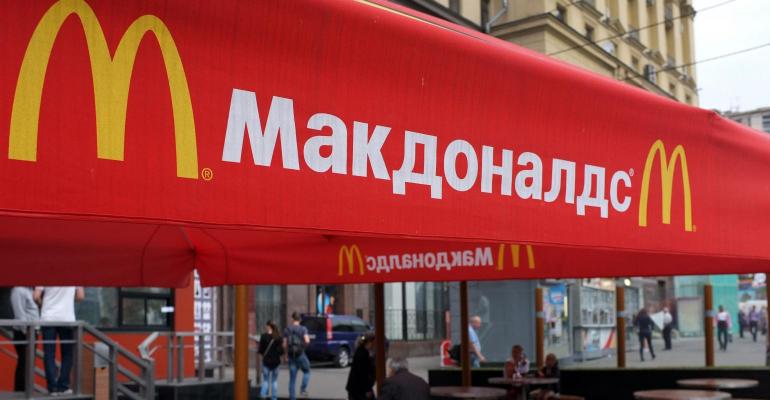 McDonald's Corp. will exit the Russian market and sell its business in the wake of the Ukraine invasion.
News>Quick Service

‘Continued ownership of the business in Russia is no longer tenable’ because of Ukraine war, company says

McDonald’s Corp. will exit the Russian market and has started a process to sell its business in the country in the wake of its invasion of neighboring Ukraine, the company said Monday.

The Chicago-based burger brand on March 8 temporarily closed its more than 800 restaurants in Russia and paused operations after more than 30 years in the country. At the end of 2021, the company had 847 locations in the country and 15% were franchised units.

“We have a commitment to our global community and must remain steadfast in our values,” said Chris Kempczinski, McDonald’s CEO and president, in a statement. “And our commitment to our values means that we can no longer keep the Arches shining there."

The company said “the humanitarian crisis caused by the war in Ukraine, and the precipitating unpredictable operating environment, have led McDonald's to conclude that continued ownership of the business in Russia is no longer tenable, nor is it consistent with McDonald's values.”

McDonald’s will pursue selling its Russian restaurants to a local buyer, the company said.

Stock analysts said the move was not a surprise. David Tarantino of Baird Equity Research said, “We already had assumed the company eventually would choose to end operations in the market. We previously had removed the Russia locations from our model, and as a result, we are not changing our forward estimates.”

The financial implications, he said, are that McDonald’s intends to book a charge of $1.2 billion to $1.4 billion, which reflects a write-off of net investment in Russia and recognition of foreign currency translation losses.

McDonald’s said it planned to start the process of "de-Arching" the Russian restaurants, “which entails no longer using the McDonald's name, logo, branding and menu, though the company will continue to retain its trademarks in Russia.”

McDonald's added that a priority is to ensure the employees of McDonald's Russia continue to be paid until the close of any transaction and that employees have future employment with any potential buyer.

"We have a long history of establishing deep, local roots wherever the Arches shine,” Kempczinski said. “We're exceptionally proud of the 62,000 employees who work in our restaurants, along with the hundreds of Russian suppliers who support our business, and our local franchisees. Their dedication and loyalty to McDonald's make today's announcement extremely difficult.”