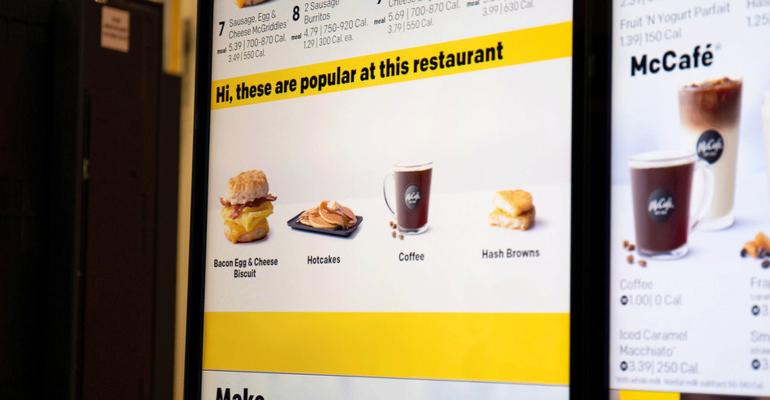 Going forward this year, McDonald’s said it is pivoting its focus to overall restaurant operations, especially at the drive-thru. McDonald's said it has deployed menu boards with automated suggestive selling at 700 restaurants through Dynamic Yield. In late March, the Chicago-based chain purchased the decision logic technology company, which uses artificial intelligence to automate the upselling of menu items based on time of day, trending items and weather.

“We’re leveraging technology to improve and modernize the way we connect with customers,” CEO Steve Easterbrook told investors during a conference call. “We’re confident about the road ahead.”

Besides technology, McDonald’s is turning to old-fashioned head-to-head competition to incentivize employees to improve drive-thru sales and speed at breakfast. In the first quarter, Easterbrook said the company launched a drive-thru challenge at breakfast, which are similar to competitions held at the brand’s European restaurants.

He did not provide specific details, including how many restaurants were involved or what rewards were given beyond bragging rights. A store in Idaho won the challenge, where the goal was to improve drive-through service and times.

“It made a difference,” Easterbrook said. “We’re serving our guests faster at a critical daypart.”

This quarter, U.S. same-store sales were lifted by certain promotions, including the introduction of Donut Sticks at breakfast. The limited time offer launched in mid-February and recently fell off the menu. 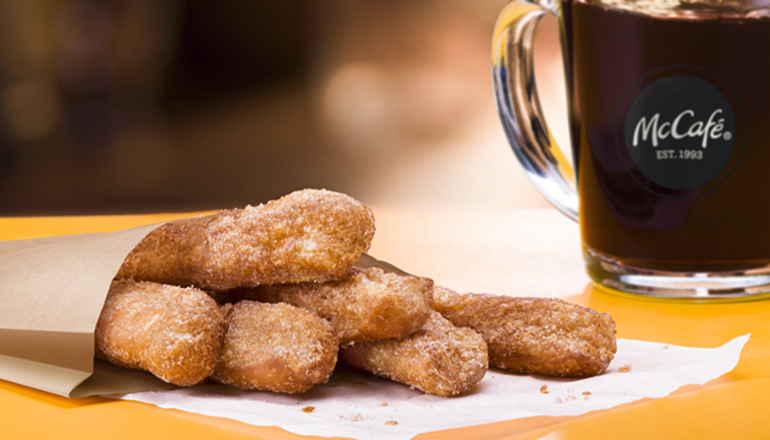 “It was a strong start to the year,” Easterbrook said. “But we still have a lot of work to do to take share back in that segment.”

In the U.S., same-store sales increased 4.5%, compared to a 2.9% gain in the first quarter of last year. The domestic results beat expectations, which predicted a 3% gain, according to Bloomberg.

The chain saw a 5.4% increase in global same-store sales, compared to a 5.5% gain last year, same period.  It was the company’s 15th consecutive quarter of positive global comparable sales.

“We remain focused on running better restaurants and elevating the experience for our customers by providing convenience on their terms through delivery, Experience of the Future, and our evolving digital channels,” Easterbrook said in a statement.

The improvement in the U.S. was driven by a handful of menu promotions that resonated with consumers including the so-called Bacon Event, the 2 for $5 Mix & Match Deal, and Donut Sticks at breakfast. The company also said Experience of the Future restaurants are having a “positive impact” on sales now that half of the chain’s 14,000 restaurants are complete. 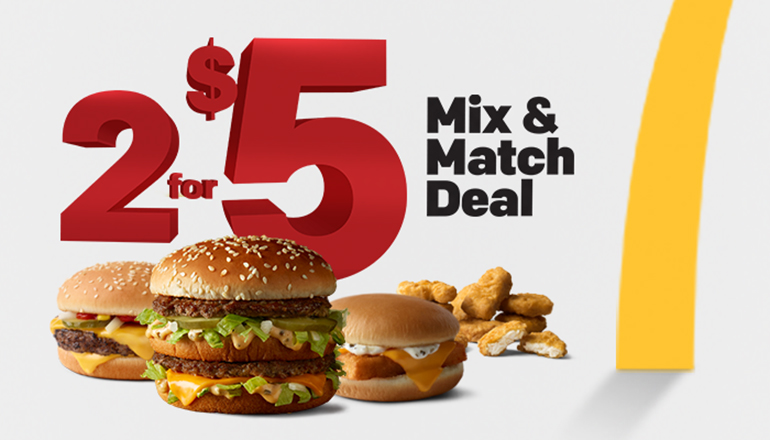 Easterbrook said the bacon promotion, which involved giving consumers the ability to add bacon to fries, the Big Mac, or Quarter Pounder, resonated with customers. The CEO said it was also a good example of introducing new foods without adding complexity to the kitchen because it involved core McDonald’s menu items.

He said it is a constant “balancing act” to create new menu news that won’t challenge operations. That’s why the company made the announcement earlier this year to trim its late-night menu, he said.

“For us, putting guard rails over that is smart,” he said.

Still, McDonald’s is under pressure from consumers and advocacy groups to offer a plant-based meal, a growing trend among top quick-service chains.

Burger King, for example, announced plans Monday to roll out the vegan “Impossible Whopper” across the country by the end of 2019. The sandwich is made with a plant-based patty made by Impossible Foods, one of many high-profile plant-based suppliers serving the industry.

When asked by an analyst where McDonald’s stands on adding a plant-based dish, Easterbrook said his culinary teams are “paying close attention to it.”

“The key for us is to identify the sustaining consumer trends,” he said.

Whatever McDonald’s decides, the company must consider whether the “additional complexity” is worth the investment, the CEO said.

“Maybe more to come,” he said.

“We continue to recommend concepts that are digitally enabled and ahead of the curve on engagement, as we believe these concepts not only achieve stronger same-store sales, but also develop a cost advantage relative to peers,” he wrote in a pre-conference call report.