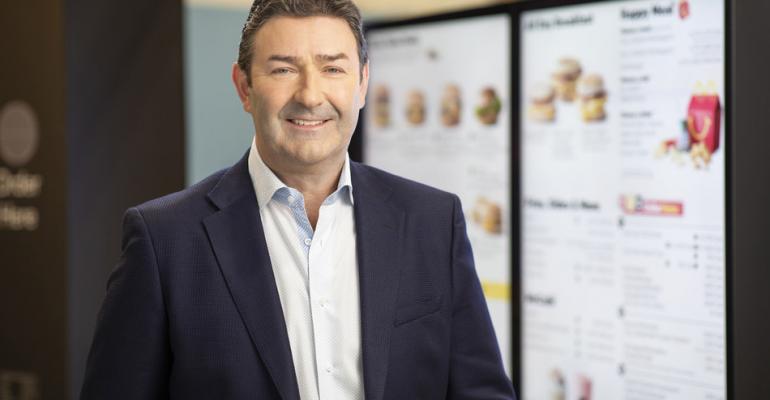 'The Board will follow the facts wherever they may lead,' the chain says about new allegations that have surfaced about alleged misconduct tied to the chain's human resources division.

McDonald’s Corp. has expanded its probe of fired CEO Steve Easterbrook, who the chain has accused of covering up relationships with other employees, approved stock grants and destroyed evidence.

The company now maintains that Easterbrook’s corporate deceit includes covering up “improprieties by other employees alongside allegations of potential misconduct within the human-resources department,” according to a report by the Wall Street Journal.

"The Board will follow the facts wherever they may lead," the comapny said in a statement sent to Nation's Restaurant News late Wednesday.

Easterbrook, who has denied the breach of contract allegations, could not be reached for comment.

Easterbrook was fired last November after admitting to having a consensual relationship with an employee, which violated company policy. At the time, the board agreed to a substantial severance plan that the chain now wants to recoup.

The Chicago-based burger giant filed suit in the Court of Chancery of the State of Delaware to recover compensation and severance benefits that would not have been retained by Easterbrook had he been terminated for cause. The suit was filed after an internal investigation discovered “photographic evidence” that the CEO was engaged in a physical sexual relationship with other company employees.

“In July of this year, the Board was made aware of new allegations regarding additional misconduct by the company’s former CEO," Rick Hernandez, board chairman, said in a statement. "As it did last fall, the Board took immediate steps to investigate those allegations with the help of outside counsel. Based on that investigation, it became clear that the Company’s former CEO had lied and destroyed evidence regarding the extent of his inappropriate behavior."

According to the WSJ, Easterbrook “ignored complaints about the conduct of co-workers and executives" including employees in the human-resources department.  That led to the firing of McDonald's chief people officer David Fairhurst, who exited the company the day after Easterbrook was fired.

The company said its board and current CEO Chris Kempczinski are committed to leading with integrity.

Upon her arrival, she initiated a top to bottom review of the human resources department that included: a cultural assessment that involves surveys and listening sessions with employees and a review of how employees are hired, how performance is evaluated and how employee concerns are raised and investigated, company executives said.

The company will specifically be asking workers about their experience at McDonald’s and for feedback on "bright spots and blind spots" within the company when it comes to values.

"We know actions speak louder than words," the company said. "Since being appointed CEO in November, Chris has installed a new Chief People Officer, announced refreshed values with input from employees around the world, and has committed to making these values part of everything we do. We will continue to make changes, where necessary, to support all parts of our organization."

Update: This story was edited to include statements from McDonald's Corp.