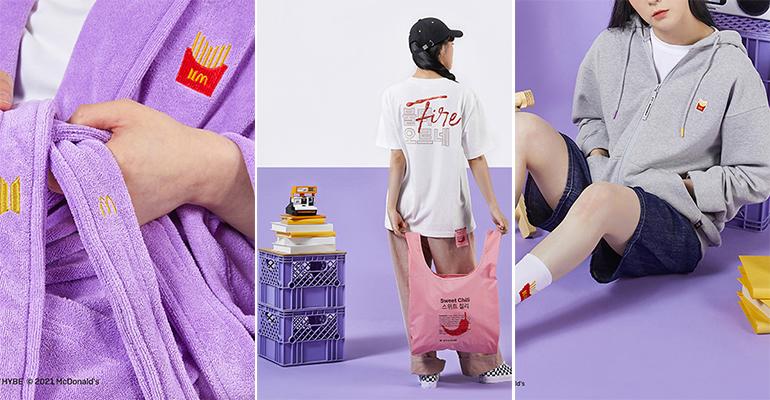 Along with the debut of Korean pop (K-pop) group BTS’s signature meal at McDonald’s on Wednesday, the quick-service giant will also be releasing a line of merchandise for fans, the brand announced.

At 7 p.m. EDT, McDonald’s will launch a line of BTS-inspired merchandise on the shopping app Weverse Shop — owned by BTS’ record label — featuring clothing, shoes, beach accessories, bags and more to celebrate the international collaboration using the band’s signature purple color and the McDonald’s logo throughout.

“Seeing the passion and anticipation from our fans worldwide since we announced the BTS Meal has been incredible,” said Morgan Flatley, chief marketing and digital customer experience officer, McDonald’s USA, in a statement. “And the best part is, we are just getting started. We are preparing to give customers even more ways to experience this collaboration in the coming weeks — through a merch drop and exclusive digital content that will provide a behind-the-scenes look at BTS.”

This is the first Famous Order to be available globally.

Along with the merchandise, McDonald’s has launched a commercial featuring the band’s new song, Butter, which has already topped the charts and broken records across YouTube and Spotify. BTS is also collaborating with McDonald’s on “never-before-seen digital surprises” as part of the month-long rollout, including in-app surprises for McDonald’s customers, according to the chain.

McDonald’s dropped merchandise lines for both Scott and Balvin, with Scott’s selling out in less than a day. The Chicago-based chain also launched a new line of merchandise when it debuted a crispy chicken sandwich earlier this year.

Click through the gallery to get a sneak peek at the latest merchandise before it drops tonight.