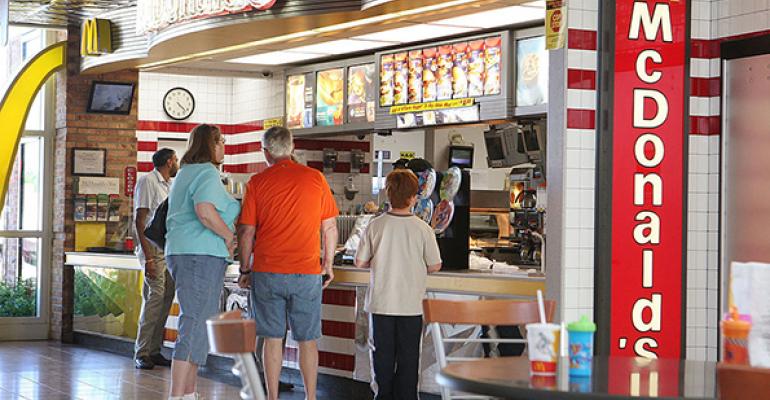 Limited-service chains get their customers back

But the way people eat fast food has changed&nbsp;

But that doesn’t mean the sector is back to the way it was in 2007. Much has changed in those years, especially the way people eat fast food.

Consumers’ allegiances have shifted. In recent years, consumers have taken their spending from traditional restaurant stalwarts and instead are spending it at up-and-coming concepts that offer cutting-edge menus and business models.

The bigger quick-service chains have responded with remodels, menu changes, technological advancements and other efforts to get back into the hearts of consumers. But with ingredient costs high, they haven’t been able to use their primary strength — marketing reach — to get those customers back.

That changed this year, when just about all of the major quick-service restaurant brands unleashed a price war, the likes of which haven’t been seen since, well, the recession.

McDonald’s, Burger King, Wendy’s, Hardee’s and Carl’s Jr., Subway, KFC, Pizza Hut and others are all offered some sort of value deal early in the year, and are frequently backing it with heavy marketing dollars.

“Traffic at most burger QSR chains has been declining,” said Andy Puzder, industry veteran and CEO of CKE Restaurants Inc., operator of Carl’s Jr. and Hardee’s. “Part of that is related to the growth of better burger chains — although I don’t think they have better burgers than we do.

“Most chains had to raise prices aggressively in 2014, when commodity costs had rapid spikes. Those costs have normalized this year. QSR brands are now in a position to recover lost transactions by discounting.”

Most of the largest, traditional quick-service chains have seen sales stagnate or even fall in recent years.

McDonald’s Corp., which saw traffic increase considerably between 2008 and 2012 as consumers opted for value, it saw an 8.7 percent cumulative traffic decline from 2013 to 2015, as calculated by NRN based on Securities and Exchange Commission filings.

Given price increases and reduced discounting in those years, those numbers likely indicate traffic fell at those chains. And that lost traffic shifted to other companies.

Much of the traffic shifted to non-restaurant players. Convenience stores and grocery stores that sell prepared food have been competing more heavily with restaurants in recent years and have worked on improving their offerings.

Indeed, some of the strongest growth in foodservice in recent years came from c-stores, including Casey’s General Store, Sheetz and Wawa, all of which saw systemwide foodservice sales grow at least 3.75 percent in 2013 and 2014.

“Competition is no longer just the restaurant down the street,” said Bonnie Riggs, restaurant industry analyst with The NPD Group, based in Port Washington, N.Y. “They have upped the ante, so to speak, with fast food, offering quality, variety and freshness.”

Fast-casual chains have also taken a strong bit of market share within the limited-service sector. Within restaurants, they represent nearly all of the growth in recent years.

Fast-casual restaurants offer a promise of higher quality food, at a higher price point than quick-service restaurants, but with a counter-service model.

These restaurants have long been taking traffic away from casual-dining restaurants that have seen steady erosion in business in recent years. Fast-casual restaurants also lure quick-service diners who want a better meal.

“The low hanging fruit for fast casual is the QSR customer,” said Andy Wiederhorn, CEO of the burger chain Fatburger, the Beverly Hills, Calif.-based, 150-unit chain. “It doesn’t take much to convince a percentage of QSR customers that, for a slightly higher average check, they can get better quality and experience. It’s not really a hard sell.

There’s also a sense that consumers are looking for something different. Part of the growth at chains like Chipotle Mexican Grill, Tender Greens and Shake Shack is that they’re new and exciting to younger consumers.

Rules for the new consumer

These chains have also taken advantage of what many see as a shift in consumer demands.

“Millennials are shaking up everything,” said Wally Doolin, founder of Dallas-based TDn2k, parent company of Black Box Intelligence. “When you look at fast-casual, they were created for Millennials by Millennials. Guess what? It’s working. They are well positioned.”

That has many traditional quick-service restaurants scrambling to make changes in their supply chains to appeal to those younger consumers.

Numerous chains have made commitments to source nothing but cage-free eggs. Chains like McDonald’s and Subway have agreed to source chicken without antibiotics.

Even Hardee’s and Carl’s Jr., which has built its business by targeting what Puzder calls “young, hungry guys” with a series of ads featuring supermodels such as Kate Upton, has made such an effort.

The chains recently introduced an All Natural Burger, with all natural, grass-fed, hormone-free and steroid-free beef. It is the only major quick-service chain to release such a burger.

“It wasn’t in reaction to Shake Shack or Five Guys or Smashburger,” Puzder said. Rather, it was in reaction to Millennials such as his 23-year-old son.

“He’s more concerned with where it’s sourced. As long as Millennials care, we’re going to care.”

Even within traditional quick-service restaurant chains, consumers have shifted their loyalties in recent years.

Several quick-service restaurants have successfully reinvigorated their brands to get them back on the growth track.

One of the best examples of this is Arby’s. The chain had been struggling in 2010 when its parent company, then known as the Wendy’s/Arby’s Group, opted to put the chain on the market. In 2011, Roark Capital Group bought the chain.

The new owner closed a number of Arby’s locations. The company focused on marketing and developed a series of popular, innovative products, including the smoked beef brisket sandwich and Arby’s Sliders.

In 2012, Sun Holdings LLC bought 51 Arby’s locations in Dallas. At the time, the restaurants had average unit volumes of $770,000, Sun Holdings CEO Guillermo Perales said. Today the units have volumes of $1 million.

That has given Perales the incentive to buy more Arby’s locations in Houston. He also agreed to develop 15 locations in that market over the next five years.

“Arby’s as a brand has done a much, much better job with new products and marketing and ideas,” Perales said. “And their advertising has grown nicer. They’ve had a good run.”

Other traditional chains have taken back share, too. Popeye’s Louisiana Kitchen Inc. had been a struggling Atlanta-based chicken chain, coming off of two years of same-store sales declines in 2007 and 2008, when it began attracting customers with its spicy, Louisiana-style chicken.

Same-store sales have increased an average of 4.5 percent between 2010 and 2014 and the company added 20 percent to its unit count over that time.

Lake Forest, Calif.-based Del Taco Restaurants Inc., likewise, shifted its 544-unit brand to focus on higher-quality items to go along with its low-cost menu. The Del Taco chain has generated 14 straight quarters of same-store sales growth and last year was taken public in a reverse merger by restaurateur Larry Levy.

“It’s an exciting time at Del Taco,” CEO Paul Murphy said at the Orlando, Fla. ICR Conference in January. “We feel good about where we’re at.”

The big question is whether traditional quick-service chains can regain traffic with discount deals.

As it is, KFC has seen same-store sales increases for six straight quarters after years where the chain ceded ground to Popeyes and the Atlanta-based chicken sandwich chain Chick-fil-A.

KFC’s systemwide sales, which decreased more than 6 percent in 2013, grew 2 percent last year. Part of the reason: The chain’s marketing, including a $5 Fill-Up Box, proved to be successful.

Fatburger’s Wiederhorn, for one, believes the discounting is dangerous because it hurts operators’ margins.

“What QSR guys should be doing is sticking to core products and working on experience,” he said. “To me, what happens is you’re chasing statistics, instead of the bottom line. By introducing LTOs with less margin in a rising wage environment and already high food costs, you’re squeezing the life out of your operators.”

Yet, given how many chains are discounting products to get customers back, maybe they don’t have a choice.

Wendy’s last fall started offering a Jr. Bacon Cheeseburger, chicken nuggets, fries and a drink for $4. McDonald’s began the year with its new McPick 2-for-$2 menu, offering two items from a selection of four for $2, though that deal has since ended. Burger King one-upped the group with a 5-for-$4 meal with a single bacon cheeseburger, nuggets, fries, a drink and a chocolate chip cookie for $4.

Hardee’s and Carl’s didn’t have a choice after its competitors offered meal deals for $4. So the chains started selling a meal with a Double Cheeseburger, Spicy Chicken sandwich, fries and a drink for $4 called the “$4 Real Deal.”

“I would have preferred not to do a $4 Real Deal,” Puzder said, “But I don’t want to lose customers.”

Correction: March 2, 2016 This story has been updated to make clear that McDonald's traffic fell from 2013 to 2015 by a cumulative 8.7 percent and that the sales declines in 2013 and 2014 as well as c-store sales numbers were all systemwide sales number.