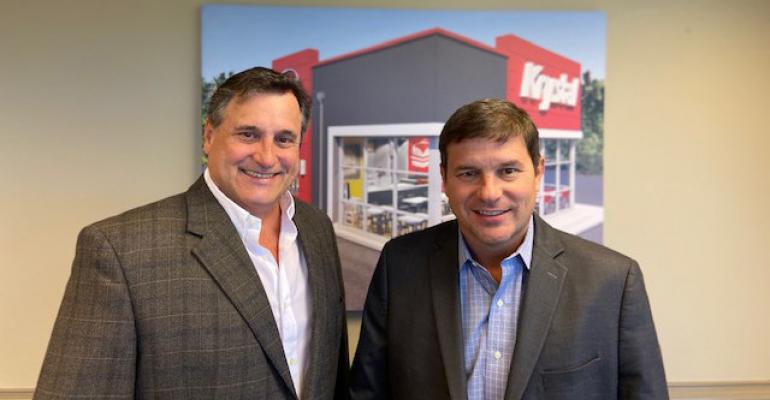 The two executives “are leaving the company to pursue other opportunities,” the company announced Thursday.

Krystal named Tim Ward, previously from Captain D’s, to the new position of president and chief operating officer. Bruce Vermilyea, who spent 18 years at Qdoba, was named chief financial officer. The veteran QSR executives will lead the chain as it continues its revitalization plan.

“Krystal is a brand that I have long admired, and I could not be more excited about the opportunity to lead this organization,” Ward said in statement. “I have long felt that Krystal had so much more potential as an iconic, 87-year old brand, and I'm looking forward to making that happen.”

Macaluso’s last day was last week. Krystal said they are not scouting for a new CEO. The brand said Ward, who started Nov. 11, will lead the company.

Michael A. Klump, founder and CEO of Krystal owner Argonne Capital Group, said the two new executives were tapped for their history of operational excellence.

“We look forward to working with Tim, Bruce and the rest of the Krystal team to build upon some of our recent wins including facility improvements, improved food quality, a recently announced refranchising initiative and the signing of our first franchise development agreement in over a decade,” the company said in a statement.

Krystal, known for its small square burgers, has 320 restaurants in nine states. The brand recently shuttered 25 locations as part of a strategic plan to close underperforming units and “reposition resources to support other Krystal locations,” the company said.

That strategic plan also includes refranchising about 100 to 150 company-owned restaurants, the company announced in late October.