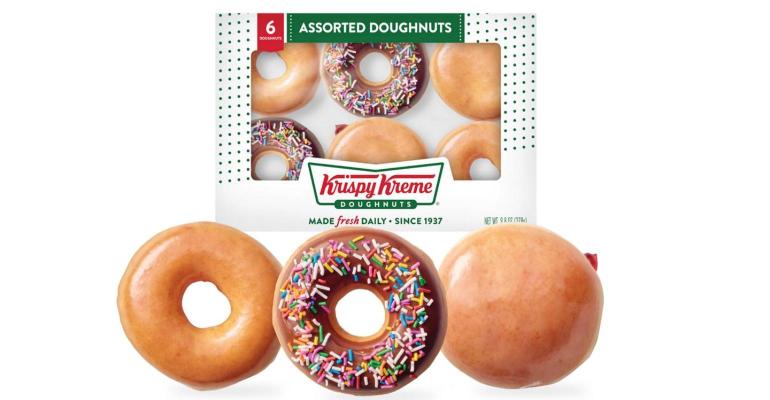 The omnichannel strategy appears to be working for Krispy Kreme, though with mixed results.
News>Quick Service

Retail — especially e-commerce sales — at Krispy Kreme and Insomnia Cookies has increased points of access and driven revenue growth by 10.1%

At the height of Krispy Kreme’s retail presence in the early 2000’s, it was a lot easier to find a Krispy Kreme store selling the brand’s piping-fresh glazed doughnuts, with lines of customers waiting for the hot light button (indicating a fresh batch of doughnuts) to turn on. Now nearly two decades later, Krispy Kreme’s strategy has changed greatly in light of slower profits, and the JAB Holding Company-owned brand has been closing stores in favor of a new hub and spoke model that focuses on adding retail doors and e-commerce channels.

“People started to overdevelop the doughnut shop business in the U.S. and doing a direct service delivery where they wouldn’t drop these doughnuts for five days, and that’s just not a good doughnut,” CEO Mike Tattersfield told Nation’s Restaurant News. “[…] We have to really have a hub and spoke business which really leverages the hot light and then figures out a way […]to have the right ones to deliver to every day.”

The omnichannel strategy appears to be working, though with mixed results. Sales revenue grew 10% to $378 million for the third quarter ended Oct. 2, reflecting a 17% increase in global points of access wherever doughnuts and cookies are sold, and particularly in international markets. However, Krispy Kreme reported a net income loss of $13.1 million, or 8 cents per share, compared with a loss of $5.7 million, or 4 cents per share compared with 2021, impacted mainly by outside economic pressures. Like many foodservice companies, Krispy Kreme had to rely on price point increases to help boost revenues, given the current macroeconomic conditions, including one single-digit price increase in September and another at the start of Q4 last month.

But Tattersfield remains confident in Krispy Kreme’s long-term success, especially with the company’s forward-thinking strategy of going all-in on e-commerce and increasing points of access. The company just announced a surprising partnership with McDonald’s, which will begin a test of selling Krispy Kreme doughnuts at several restaurants this year.

“When we lay out a strategy, when we first got here, and we were trying to figure out the hub and spoke model, we gave ourselves a short-term goal to how are you going to get the 20,000 points of access back?” Tattersfield said, talking about getting into a partnership with a larger retailer like McDonald’s. “How does managing a customer like McDonald’s work? How does it work for their dayparts? You really have to do rigorous operations testing because other channels or partners will evolve.”

Tattersfield said that they are taking this same approach with going into any partnership, including the retail partnership with Walmart. Although there are not as many Krispy Kreme doughnut shops as there once were, the company wants to make sure you can pick up a doughnut or a dozen at your local convenience store, grocery store, or even Walmart. The company is following a similar strategy with Insomnia Cookies, which saw double-digit same-store sales growth led by e-commerce sales.

Between both brands, Tattersfield noted that they added 382 points of access last quarter, though they expect that number to slow significantly during the holiday season in Q4. Eventually, Krispy Kreme wants to reach 50,000 points of access globally, including stores, grocery store doors, and McDonald’s drive-thrus.

“It is about having that omnichannel model work,” Tattersfield said. “Then the access points and brands that have a drive thru or brands that do delivery are complimentary, but it really does help build out a fresh donut model. If you only relied only on the grocer and the hub, then we're only in 25% of where Walmart is today in our current footprint. So when you start to build out you want to see that you can build out geographically.”

In the future, you can expect a continued focus on this hub and spoke model as the company continues to churn out menu innovation, based on premium-priced seasonal doughnuts and even new inventions like the dog-friendly doughnuts that were released in August.