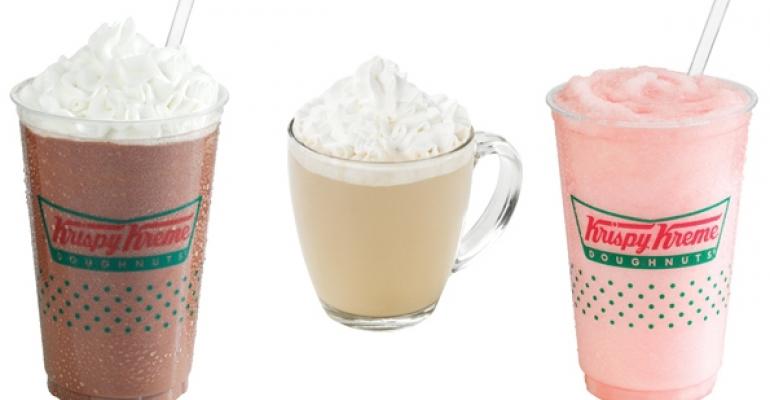 “We will continue to market and expand our beverage program with the goal of significantly increasing the percentage of transactions that include a beverage purchase,” Morgan said in an earnings call with analysts last month, adding: “We know that beverage sales are up.”

Offering beverages is a way of upselling customers who buy doughnuts, but can also increase customer satisfaction and loyalty, Krispy Kreme chief marketing officer Dwayne Chambers said. “We’re taking the broad approach, so that anyone who wants a beverage can get one at Krispy Kreme,” he noted.

Pushing beverages to increase sales growth isn’t a new strategy for Krispy Kreme. At the ICR XChange conference in January 2012, Morgan said: “In the near-term, we believe there’s clearly significant sales and profit opportunity by leveraging doughnut sales with add-on coffee or other beverage purchases. We envision these future sales as being additive and, in fact, expect them to lead to additional doughnut sales.”

The upside could be significant for Krispy Kreme if guests begin to view it as a coffee destination, said Conrad Lyon, a restaurant industry analyst at B. Riley & Co. That's because coffee margins are extremely high, and customers tend to stay loyal to brands they like.

“It’s certainly still an initiative that they’re working on,” Lyon added. “It’s been a lot tougher than they had expected. They would love to get the average check boosted…I think more important is getting the loyalty factor increased."

Strong doughnut sales have slightly hindered Krispy Kreme’s coffee and beverage growth. However, “One thing they’re being really smart about is that you don’t want to damage the brand recognition of the doughnut,” Lyon said. “They don’t want to take away the consumer lust for their doughnuts.”

User experience also plays a role. Only about 10 percent of Krispy Kreme purchases are consumed on premises, Chambers said. Fifty percent are drive-thru orders, and 40 percent of transactions consist of customers picking up boxes of doughnuts to be eaten elsewhere. Dozen–doughnut boxes are the chain’s best-selling item.

“Most of the experience is happening somewhere else,” Chambers said. Therefore, when trying to sell beverages, the point of sale is the most effective place to reach consumers.

Since Krispy Kreme customers are largely on the go and likely purchasing for others, the key to increasing beverage sales lies with unit-level employees, Chambers said. “The most important thing to do is to have something to talk about [with customers],” he said. “The second is to engage team members.”

For instance, an employee might suggest a Pumpkin Spice Latte to go with Krispy Kreme’s Pumpkin Spice doughnut, or a drip coffee to go with its classic Glazed doughnut. Effective interaction serves the customer’s needs, he pointed out.

“We’re tapping into what’s already going on in a consumer’s life,” Chambers said. “From a business standpoint, it’s a huge opportunity for us.”

Chambers said Krispy Kreme aims to increase beverage sales and customer loyalty slowly over time, rather than achieve a promotional sales spike. He likened the chain’s beverage sales growth to its overall growth: Slow and steady gains over the past 18 quarters that have lead to significant sales increases over time.

Winston-Salem, N.C.-based Krispy Kreme Doughnuts Inc. had 773 locations as of May 5.