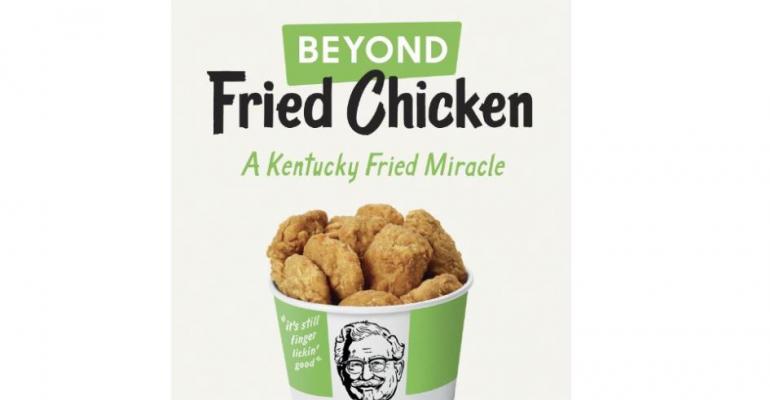 KFC said it will become the first national quick-service chain in the U.S. to launch a plant-based chicken with the Tuesday launch of Beyond Fried Chicken.

The alternative protein by Beyond Meat will be testing at a franchise restaurant in Atlanta. It comes in two forms: chicken nuggets and boneless wings.

Related: Tag, you're it: Subway becomes next big chain to add plant-based meat

The partnership with Beyond Meat comes after the chain looked at products from seven to eight suppliers, Head Chef Bob Das told Nation’s Restaurant News during a sneak peek tasting event held last week at the company’s Louisville, Ky.-based headquarters.

Ultimately, El Segundo, Calif.-based Beyond Meat Inc. emerged as the winner because the company was able to work with KFC’s culinary team to create a proprietary plant-based white chicken meat, Das said.

Customers can choose to toss the boneless wings in one of three sauce options: Nashville Hot, Buffalo or Honey BBQ. The wings are $6 for six pieces, or $12 for 12 pieces. The nuggets are served with choice of any KFC dipping sauce. The cost: $1.99 for four a la carte pieces. The plant-based nuggets can also be ordered as a combo meal.

“Customer feedback from the Atlanta test will be considered as KFC evaluates a broader test or potential national rollout,” the company said in a statement.

Ethan Brown, founder and CEO of Beyond Meat, said bringing Beyond Fried Chicken to market “speaks to our collective ability to meet the consumer where they are and accompany them on their journey.”

“My only regret is not being able to see the legendary Colonel himself enjoy this important moment,” Brown said in a statement. 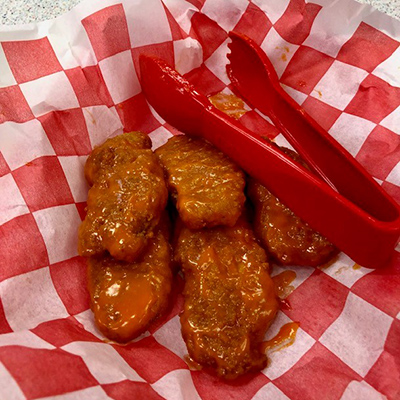 Photo: KFC chose Beyond Meat to create a proprietary plant-based chicken nugget and boneless wing (shown) for the brand. A test of the product begins Tuesday in Atlanta.

Beyond Meat and Impossible Foods Inc. dominate the growing plant-based meat space, though an increasing number of other companies are providing alternatives due to growing demand in foodservice.

The company is earning a reputation for working with restaurant chains to create custom plant-based products that mimic the flavor and texture of popular menu items.

In early August, Subway said it co-developed a Beyond Meat meatball for a plant-based meatball sub that will debut in 685 restaurants in the U.S. and Canada in September.

Del Taco, which debuted Beyond Tacos in April, said the alt-protein tacos have become one of the best-selling new products in the chain's history. In mid-June, the company said it had sold about 2 million tacos.

KFC, a division of Louisville, Ky.-based Yum Brands, has about 4,100 restaurants in the U.S.

The Atlanta restaurant testing Beyond Fried Chicken is at 2637 Cobb Parkway near SunTrust Park, the home ballpark of the Atlanta Braves.