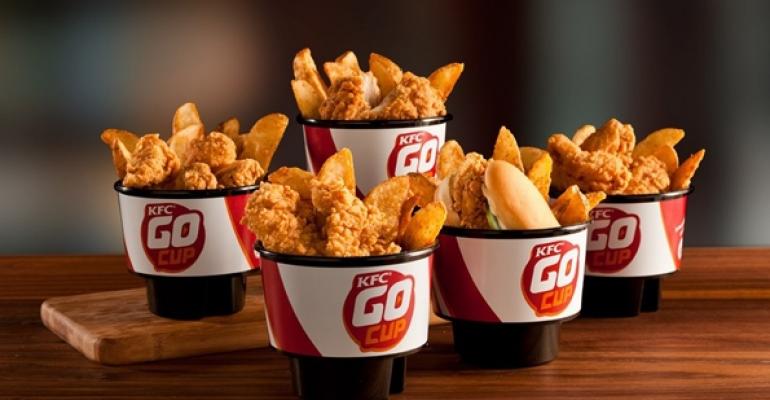 KFC launched a new Go Cup snack item on Wednesday that fits in most car cup holders and aims to take a bite out of the quick-service segment’s snack market share.

The items are served in a new, patented Go Cup, which fits in most vehicle cup holders. The cup also has a wider rim to fit the chicken, which is separated from the potato wedges with a divider.

“Today’s on-the-go snackers are going to love the Go Cup because it features awesome taste and great value, and in the ultimate portable package,” said Jason Marker, chief marketing officer for KFC U.S., based in Louisville, Ky.

To promote the item, KFC launched a #GoCupGo Instagram photo contest Monday, asking guests to submit photos of themselves on the go with their Go Cups for a chance to win a Polaroid Z2300 camera or $250 worth of iPhone photography accessories, as well as being named KFC Social Correspondents for a year.

An estimated 53 percent of car owners between the ages of 18 and 32 would be more likely to eat in their cars if the food container fit in the cup holder, according to a survey by KFC. Another 35 percent of Americans describe themselves as one-handed eaters in the car, KFC said.

Restaurants claimed 22 percent of consumer snacking occasions in 2012, an increase from 17 percent in 2010, according to market research firm Technomic Inc. Thirty-seven percent of American consumers have broadened their definition of a snack to include more types of foods, beverages and restaurant fare, the firm found.

Chains are increasingly targeting snack opportunities, not only because American consumers like to eat on the run, but also because it stretches sales into untapped off-peak periods. KFC, for example, launched both slider-sized Chicken Littles sandwich and Original Recipe Bites last year, at a time when chicken snacks were proliferating.

In 2005, Burger King introduced BK Chicken Fries, chicken strips shaped like French fries and served in a round container that fit into cup holders, with a pocket for dipping sauce. The item was discontinued last year.

KFC, with 17,000 units worldwide, is a division of Louisville-based Yum! Brands Inc.