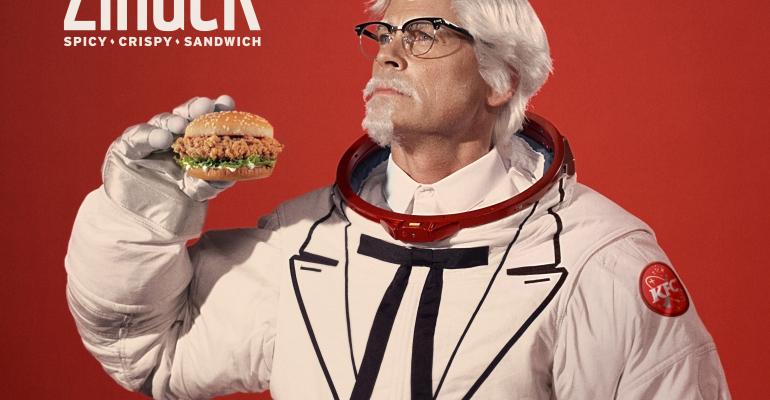 KFC enlists Rob Lowe for the next colonel

Rob Lowe is going to send a Zinger into space.

The actor will be the newest version of KFC’s Colonel Sanders in ads featuring the Zinger sandwich.

In the ads, the veteran actor and funnyman will wear a spacesuit, talking about sending KFC’s Zinger out into space. The ads are set to start on Sunday.

“My grandfather was the head of the Ohio chapter of the National Restaurant Association in the 1960s and took me to meet Colonel Harland Sanders when I was a kid,” Lowe said in a statement. “It was a big deal. I thought this would be a nice homage to both Colonel Sanders and my grandfather.”

KFC has used a series of advertisements featuring various actors and comedians playing its iconic founder over the past two years. The irreverent ads have helped reinvigorate sales at the Louisville-based chicken chain. Several actors have taken turns playing Sanders.

The latest ads come as the chain has introduced its Zinger to the U.S. The sandwich is popular in KFCs around the world, and the chain is finally bringing it stateside next week. It’s served with lettuce and mayonnaise on a toasted sesame seed bun.

First introduced in Trinidad & Tobago in 1984, the sandwich is marinated chicken breast, double-breaded in the chain’s Extra Crispy breading with a proprietary spice blend.

It will be available as part of KFC’s line of $5 Fill Up boxes, along with potato wedges, a cookie and a drink. An individual sandwich will be priced at $3.99.

KFC is promising more details about its campaign to send one of these sandwiches into space later this spring.

“I have no idea how we’ll launch a chicken sandwich into space, but the marketing team thinks they can do it,” Kevin Hochman, KFC’s U.S. president and chief concept officer. “What I do know, is the Zinger is the best selling KFC chicken sandwich in 120 countries, and it’s now available in America.”