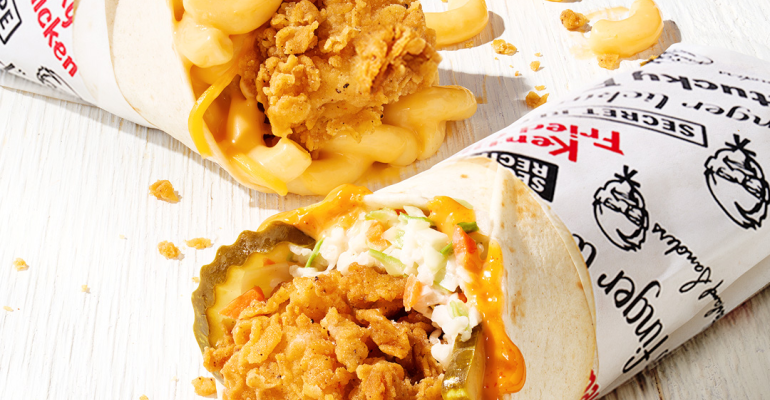 The former KFC Chicken Twister was on menus until 2014 and is currently only available in some international markets.
News>Quick Service

KFC is bringing back fan-favorite wraps in new formats

The KFC Twister Wraps have been off the menu since 2014, and now the Yum Brands company is putting a new spin on them with a test of three new wraps

KFC announced Monday that the Louisville, Ky.-based chicken chain is bringing back wraps in a new form, thanks to clamoring fan requests. The former KFC Chicken Twister was on menus until 2014 and is currently only available in some international markets. The new KFC chicken wraps — which come in three varieties, classic, mac and cheese, and spicy slaw — will be tested out at select locations in Atlanta-area stores starting Oct. 3.

Much like its sister brand, Taco Bell, KFC is using nostalgia hype for now-defunct menu items to ramp up customer engagement. Unlike the Mexican Pizza, however, which returned with its classic recipe, the new KFC wraps are a different product from the Chicken Twister that disappeared from menus nearly a decade ago. According to KFC, there have been 42,000 social media mentions over the past two years of the Chicken Twister and the company wanted to lean into its customers’ love of the item.

The new wraps are $3 each and can be purchased in a two-wrap combo. Here's how KFC describes each new menu item:

“With our new wraps, our fans in Atlanta are bound to experience a burst of finger lickin’ good flavor with every bite, whether it be from the crunch of our extra crispy tenders, the bold heat from our spicy sauce or the richness of our cheesy mac & cheese,” Chef Chris Scott, head chef, KFC U.S. said in a statement. “We’re excited to hear the feedback on these new flavor combinations from our Atlanta customers!”

Related: Why KFC chose to add nuggets to the menu after 70 years

KFC has released a list of participating locations in the Atlanta area that are participating in the menu test of the new wraps. If all goes well, they could hit menus nationally.